Washington, Dec 24 (EFE).- At least 15 people have died in the record-smashing winter storm affecting much of the United States, media outlets said Saturday.

Around 200 million Americans, or 60 percent of the US population, entered Christmas weekend under some kind of warning, according to the National Weather Service (NWS).

Sub-freezing temperatures penetrated into the Deep South and cities in the eastern two-thirds of the country were expected to experience their coldest Christmas Eve in decades.

A record low of 6 F (-14 C) was reported Saturday in Charlottesville, Virginia, 116 mi (187 km) southwest of Washington, and many locations had wind chill readings of below-zero F.

Texas Gov. Greg Abbott said on Twitter that the state was seeing record demand for electricity because of the bitter cold, which presented a challenge for hundreds of migrants who recently streamed into El Paso from neighboring Mexico and are without shelter.

Hundreds of people were trapped in their cars in the frigid temperatures.

The storm has forced the cancelations of nearly 11,000 flights over the last 48 hours, according to data from the FlightAware website, while thousands more flights suffered delays.

Airports in Atlanta, Denver, Seattle and Orlando were among those most affected by the disruptions.

By late Saturday, the number of residences and businesses without electricity nationwide had declined from 1.5 million to roughly 755,000, PowerOutage.us said.

Duke Energy asked customers in Ohio and Kentucky to forgo use of non-essential appliances and devices amid the heightened demand for heating.

Travel by road in parts of the Northeast and Midwest is “extremely dangerous and even impossible,” the NWS said Friday, hours before four people died in a 46-vehicle pileup on the Ohio Turnpike amid whiteout conditions.

The American Automobile Association said earlier this week that 113 million people were expected to be on the roads for the holiday weekend. EFE 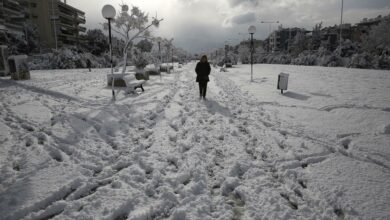