Amman, Sep 24 (efe-epa).- Four Arab and European foreign ministers on Thursday reiterated that a two-state solution is the only possible answer to the Middle East conflict.

The foreign ministers of France, Egypt and Jordan called on Palestinians and Israelis to go back to the negotiating table on that basis during a meeting in Amman to discuss the Middle East conflict.

Germany’s Heiko Maas joined the meeting through video conferencing as he has gone into quarantine due to a coronavirus scare.

“There will be no just, durable and lasting peace in the region without resolving the Palestinian question on the basis of the two-state formula,” Jordan’s Ayman Safadi said.

“This meeting represents a message of insistence on protecting regional stability and work towards achieving the two-state solution which is the only solution,” France’s Jean-Yves Le Drian stressed.

The four ministers continued to hail the recent deals normalizing ties between Israel and each of the United Arab Emirates, and Bahrain.

Maas welcomed the signing of the agreements, which he said reflected the importance of peace in the region and the possibility of achieving it.

Egyptian Foreign Minister Sameh Shukry said: “We attach big importance to this meeting and this group in achieving a just solution that enables Palestinians to regain their legitimate rights and set up their independent state on the June 1967 lines with East Jerusalem as its capital.”

The first was in Munich in February and the other was held through the video conference in July. 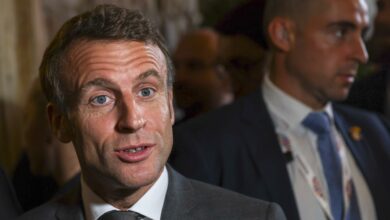