Kabul, Nov 9 (efe-epa).- At least 10 people, most of them civilians, have been killed and 32 injured in a Taliban attack in which a truck loaded with explosives was detonated close to a military base in southern Afghanistan, although the explosion mostly affected nearby houses and shops.

The attack took place on Sunday night in the Maiwand district of the conflict-ridden province of Kandahar and targeted the base of security forces deployed to protect the Kandahar-Helmand highway, provincial police spokesperson Jamal Naser told EFE on Monday.

The explosion took place at the first entrance to the base, an area surrounded by shops and houses, and the majority of the casualties involved civilians, Maiwand district governor Hajji Obaidullah told EFE.

The 10 deceased include a police officer apart from “women, children and shopkeepers,” as “several houses and shops were also partially destroyed, due to the intensity of the blast,” Obaidullah added.

A local district administration official told EFE on the condition of anonymity that the 32 wounded included 16 police officers while the rest were civilians, including women and children.

The Taliban claimed responsibility for the incident in a short statement.

“Last night a tactical blast was carried out against an important security base of the highway protection unit in which several security forces were killed and injured and several vehicles were also destroyed,” the group’s spokesperson Qari Yusuf Ahmadi said.

The attack comes despite the Afghan government being in the middle of peace negotiations with the Taliban since September in Qatar’s capital Doha, as part of attempts to end nearly two decades of war.

One of the main objectives of Kabul was to secure a ceasefire at the earliest once the talks began, but the Taliban have insisted that fighting against the Afghan security forces was part of their jihad, or holy war, which wouldn’t stop until they are ousted. EFE-EPA 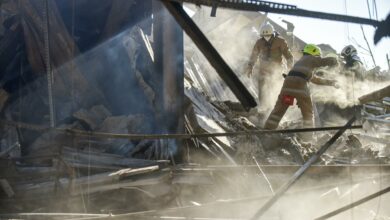