Beijing, Jul 21 (EFE).- At least 25 people have died and seven are unaccounted for as a result of record rainfall and flooding in the city of Zhengzhou, capital of the central Chinese province of Henan, according to the state-run Global Times.

Over 1.24 million people have been affected by the natural disaster, with some 36,000 “seriously” affected and roughly 160,000 people evacuated to safe places, according to local authorities.

Some hospitals have lost power due to the floods, hampering treatment for the close to 600 victims who were seriously wounded.

Patients have been transferred to medical facilities across the city and province with available electricity supply.

Authorities have dispatched 1,800 rescue personnel from the People’s Liberation Army and 250 vessels to Zhengzhou and other areas of Henan to aid in search and rescue operations, according to the Chinese Ministry of Emergency Management.

On Tuesday afternoon, Zhengzhou’s flooding emergency response level was raised to the maximum Level 1 due to the downpours that are expected to last into Wednesday night.

Videos circulating on social media show flooded streets, avenues resembling rivers, and metro carriages with passengers chest-deep in water after it poured into the subway tunnel.

The rainfall has left residential buildings without tap water and electricity and led to the cancellation of hundreds of flights, bus and train routes, Xinhua reported.

Henan province on Wednesday raised its emergency response to the highest level and said that all those living in low-lying areas were evacuated after the water level of a dam had risen rapidly due to the rainfall. EFE 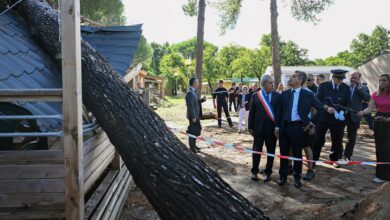