Dhaka, June 29 (efe-epa).- At least 32 people died on Monday after a boat carrying around 50 passengers capsized in Bangladesh’s Buriganga river, near the country’s capital city of Dhaka, although one person was rescued alive nearly 13 hours after the accident.

The vessel, Morning Bird, capsized around 10 am local time after colliding with another boat, the country’s River Police Inspector Lutfar Rahman informed EFE.

The death toll increased several times during the day as authorities carried out complicated search and rescue operations.

“We have rescued a total of 32 bodies which included 19 men, eight women and three children,” said Anisur Rahman, an on-duty officer of the Fire Service and Civil Defense, adding that the operations would continue.

The capsized boat was located later with search continuing until dusk, and while attempting to lift the boat out of the water rescuers found a man who had miraculously stayed alive inside the vessel for 13 hours.

“If there is any vacuum in any compartment, one can use that vacuum to survive. When we were trying to lift the launch by using airlift, the eastern side of it came out. The door of the compartment got open due to the pressure it created and he came afloat,” AKM Arif Uddin, a joint director of the Bangladesh Inland Water Transport Authorities, told reporters on the spot.

The official, who was heading the rescue team, said that the survivor was immediately shifted to a hospital.

Earlier, a rescue ship on the way to the spot was stuck due to a bridge and divers had to call off operation because of the darkness.

A deputy director of the fire service, Mostafa Mohsin, told EFE that they feared more bodies could be trapped inside the vessel.

He added that the service was trying to lift the boat out of the water along with the Bangladesh Inland Water Transport authorities, but the process could take some time.

Mohammad Riyad, the brother of a textile worker who died in the accident, said that most of the passengers had been traveling to Dhaka from the central Munshiganj district for work.

“My two brothers and relative were going to Dhaka with the launch. My elder brother and the relative could swim ashore, but my younger brother Shahin died. He worked in a garment factory in Dhaka,” said Riad.

He said that when rescuers found Shahin’s body in the sunken boat, he was seen holding a baby.

“Other survivors told us he died as he was trying to save the baby,” Riad said on phone while on his way to Munshiganj with Shahin’s body in an ambulance.

Bangladesh Dpupty Shipping Minister Khalid Mahmud Chowdhury told EFE that after the witching the CCTV footage the incident seemed like a deliberate act to him, and an investigation had been launched.

“It looked like a planned murder to me after seeing the footage. We formed a committee with experts to investigate the accident. Hopefully we will get more details once the investigation is completed,” he told EFE.

The accident took place in one of the major navigable rivers of the country, flowing past the outskirts of the capital.

The highly polluted Buriganga river forms a part of the main waterway connecting Dhaka with other parts of the country.

Boat accidents occur frequently in Bangladesh, where hundreds of waterways, including the Ganges Delta rivers Brahmaputra, Padma and Meghna, are commonly used for transport. 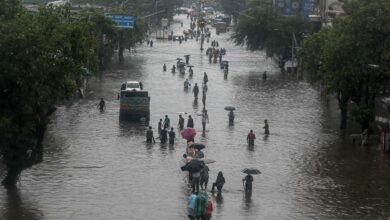