Madrid, Nov 21 (efe-epa).- Diego Simeone, who has made Atletico Madrid a force to be reckoned with Spain and Europe, got a giant monkey off his back here Saturday as the Colchoneros beat Barcelona in LaLiga for the first time in the 18 matches of his tenure as coach.

The victory lifted Atleti to 20 points, the same as Real Sociedad, but the San Sebastian club are first in LaLiga by virtue of having scored more goals than the capital side.

Barça, meanwhile, are in 10th place with 11 points after winning just once in their last six league outings.

Atletico, unbeaten in 24 LaLiga matches and undefeated at home in 19 games across all competitions, prevailed Saturday without new talisman Luis Suarez, who was excluded after testing positive for Covid-19.

The visitors had more of the ball and had their opportunities.

Antoine Griezmann fired over the cross-bar in the 2nd minute. In the 40th, Atleti goalkeeper Jan Oblak turned aside Lionel Messi’s shot from a difficult angle.

What would prove to be the only goal of the night came in first-half stoppage time.

The play began with an uncharacteristic giveaway by Barcelona defender Gerard Pique – who would leave the pitch with an injury in the second half – and continued with a pass from Angel Correa to Yannick Carrasco.

As the Belgian rushed toward goal, keeper Marc-Andre ter Stegen miscalculated by coming out so far that he gave Carrasco an easy strike into the empty net.

Earlier, defending LaLiga champions Real Madrid jumped out to a lead Saturday in the 2nd minute of their match away to Villarreal, but failed to build on that advantage and the hosts salvaged a point on a goal from the spot in the final stretch.

The Blancos could not have hoped for a better start. Mariano headed-in a Dani Carvajal cross on the visitors’ first approach to the Villarreal goal.

Real Madrid dominated in the first half against a home side eager to validate their impressive start with a solid performance against one of LaLiga’s heavyweights.

The traveling side limited the normally potent Villarreal attack to one chance in the opening period. Gerard Moreno delivered a fine pass to Dani Parejo in scoring position in the 20th minute only to see his teammate’s header skip over the cross-bar.

With Parejo and Manu Trigueros setting the pace, Villarreal were more assertive in the second half and Moreno came close to equalizing from the six-yard line.

The move turned out to be the right one.

In the 75th minute, Estupiñan found Chukwueze in the box and Real Madrid keeper Thibaut Courtois had little choice but to bring down the Nigerian. The referee awarded a penalty and Moreno converted to make it 1-1.

Buoyed by the goal, Villarreal flew forward. It took a timely intervention by Blancos defender Nacho to stop Take Kubo from winning the match for the home side in stoppage time.

Villarreal, with 19 points, are third in the table, 2 points ahead of Real Madrid.

Sevilla scored twice in the final five minutes of regulation to beat Celta 4-2. 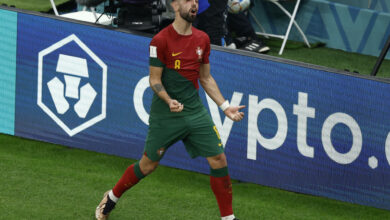