Arlington, Virginia, Sep 26 (EFE).- The culture war has moved into US schools, as during the past year more than 1,600 books have been banned in thousands of schools thanks, in part, to the efforts of organizations linked to conservative groups.

But the Public Library in Arlington, Virginia, has said “enough.”

Diane Kresh, the library director for Arlington County, a small urban enclave separated from Washington DC by the Potomac River, told EFE that she respects the right of a parent to say, in effect, “Not for my child” regarding being able to check out certain books that may be in a school’s library.

Kresh was speaking with EFE during the Banned Books Week, an annual awareness campaign promoted by the American Library Association and Amnesty International, that celebrates the freedom to read, draws attention to banned and challenged books and highlights persecuted individuals.

This year, the event comes in response to the recent wave of parental censure around the country directed, above all, at certain narratives with racial or LGBT themes.

As part of Banned Books Week, the Arlington Library is encouraging readers to take out a book that has been banned or challenged in US schools. These include texts such as “The Bluest Eye,” by Nobel Literature Prize Winner Toni Morrison, and “Gender Queer: A Memoir,” by Maia Kobabe.

The message seems to have resonated with the public given that this week all the “banned” books in the library have been checked out.

In many cases, the banning of books in schools is being encouraged, promoted and carried out by conservative politicians like Florida Gov. Ron DeSantis and his Texas counterpart, Greg Abbott.

Despite the fact that this practice has intensified in recent years, censorship linked to the defense of morals has always been a source of controversy in the US, including disagreement over including “In God We Trust” on all US currency, public buildings and even schools.

According to figures compiled by PEN America, a non-governmental organization that fights against book banning, 40 percent of the more than 1,600 books censured in US schools during the past school year have protagonists or secondary characters who are not white.

For Nikole Hannah-Jones, a reporter for The New York Times and the author of “The 1619 Project,” a literary project on the history of slavery and its contemporary echoes, banning books is a practice that always crops up in association with some kind of repression.

“Reading is liberating. Reading expands your world and your perspective. It leads you to challenge the existing hierarchies in the society,” the writer told EFE minutes before participating in an event at the Arlington library.

Hannah-Jones’ project has been challenged almost from the time it was launched.

In 2019, it began to be published in The New York Times and immediately is attracted criticism from then-President Donald Trump, who ordered an educational commission to develop a “patriotic curriculum” in response to the fact that schools were beginning to use the journalist’s work to teach US history.

Some states, like Florida and Texas, have even passed laws prohibiting the text of “The 1619 Project” from being taught in public schools.

At the center of the controversy is “critical race theory,” a catchall phrase that is being applied almost automatically to any historical work that examines the role of slavery and racism in the development of the country’s institutions.

Kresh asked – half jokingly and half seriously – if two years ago anyone ever would have thought that something like critical race theory even existed.

The term, which few know how to define precisely, has become a constant feature of the debates about education and indoctrination, and it is continually used by conservative media and pressure groups to designate teachers who are teaching about the issue of racism in their classrooms.

Hannah-Jones said that about 80 percent of US teachers are white women, adding that it defies logic to think that white women are teaching white children that they are oppressors. 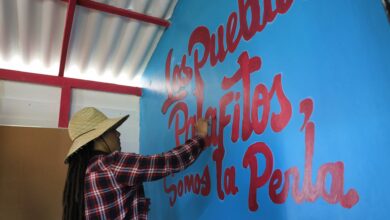