Or so it appeared before closer inspection showed the man was actually an extremely close look-alike of the leftist head of state.

Wearing the same “chotano” hat President Pedro Castillo is known for, a fashion accessory that makes him stand out from the crowd, Samuel Carrillo occasionally enjoys making heads spin on city streets with his doppelganger act.

“From the moment I leave home, everyone turns around and comes toward me,” Carrillo told Efe, who receives non-stop hugs, greetings and requests for selfies while walking in Lima’s old town just a few meters from the Government Palace, where the real president works and resides.

His resemblance to Castillo is such that even the police officers assigned to guard the presidential palace also do a double-take and are forced to call and confirm that the head of state is still inside the building.

The coincidences go beyond the mere physical aspect and their similar last names.

Like Castillo, the man nicknamed “Pedrito 2” is a native of Tacabamba, an Andean district of the northwestern Peruvian region of Cajamarca.

While the 51-year-old president was a rural schoolteacher and union leader, his 42-year-old double lives in the low-income Puente Piedra district of Lima province and is currently working as a welder after his taxi broke down.

“I came to Lima to seek out new opportunities, and with the situation we’re going through we’re not finding them,” Carrillo said in reference to a steep pandemic-triggered economic crisis that Peru began recovering from in the second quarter of 2021.

He began assuming his Pedrito 2 identity in earnest a few weeks ago after being repeatedly mistaken for the president, who burst on the political scene by surprisingly garnering the most votes in April’s first round of balloting and then narrowly defeated right-wing candidate Keiko Fujimori in the June runoff.

For Carrillo, it all began when he went to donate food and provisions to Castillo supporters who were camping outside the JNE elections authority’s headquarters while awaiting official confirmation of his runoff victory.

“I arrived wearing clothes typical of Cajamarca and they started telling me I was Castillo. At one point, I had to take off my hat and face mask because the crowd got quite big. I tried to convince them I wasn’t Castillo, but they kept saying I was,” he said.

The response to Carrillo has been almost unfailingly positive even though the new president has begun his five-year term with an approval rating (38 percent) that is lower than Peru’s seven previous heads of state.

“Of every 100 people who come up to me, only two say something negative. I’m seeing that the majority of people” are supportive, Carrillo said.

He also expressed a desire to meet the president in person one day, though adding that Castillo is someone “who’s very sought-after and it’s not that easy to arrange.”

While he walks in Lima’s old town, a list of demands are hurled in Carrillo’s direction: “Lower the price of gas!” “Weaken the dollar!” “Don’t be corrupt!” “Close the dirty press! and the most frequent one of all, “Shut down Congress!” an opposition-controlled legislative body that has been staunchly opposed to the president’s left-wing Cabinet picks.

“The people request all kinds of things. A lot of them ask me to govern well, and being the Tacabambino that I am I’m certain that he will. With this government, they have hope that the situation will change,” the “other” Castillo said. EFE 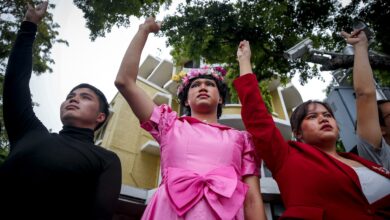