The China National Space Administration (CNSA) revealed the name at the opening ceremony of the Space Day of China in Nanjing, the capital city of east China’s Jiangsu Province.

According to the state news agency Xinhua, the name echoes with the Chinese name of the red planet, Huoxing, which means the planet of fire.

The spacecraft, consisting of an orbiter, a lander, and a rover, entered the parking orbit of Mars on Feb.24.

The next step, and the most challenging part of the mission, will be the soft landing in May, an autonomous process of the probe lasting seven to eight minutes.

The probe will use its aerodynamic shape, parachute, and retrorocket to decelerate and buffer legs to touch down, according to the space agency.

If successful, the rover will explore the red planet for about three months.

Chinese scientists intend to find more evidence for the existence of water or ice on Mars, as well as, carry out research on the material composition of the planet’s surface or the characteristics of the climate.

The goals of Tianwen-1 include mapping the morphology and geological structure, investigating surface soil characteristics and water-ice distribution.

It will also analyze the surface material composition, measuring the ionosphere and the characteristics of the Martian climate and environment at the surface and perceiving the physical fields and internal structure of Mars.

If the mission is successful, China will become the third country to do so decades after the United States and the former Soviet Union. EFE

Huawei analyses the future of the digital sector in Cancun, Mexico 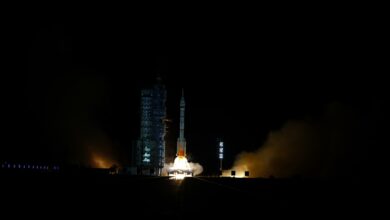