The conservative victory, which will put Yoon into the presidential mansion for the next five years, replacing liberal Moon Jae-in, is a shift to the right in South Korea, breaking the 10-year cycle between conservatives and progressives, who have been alternating in power since the country recovered its democracy in 1987.

To chants of “regime change” by his followers, Yoon said in his victory remarks that “I learned a lot while carrying out the campaign, what is needed to be a leader of a country, how to listen carefully to the people. This election process and competition are all for the people. The election is over now, and we need to be all one for the people and our Republic of Korea.”

This year’s presidential vote, in which voter participation was estimated at 77.1 percent – one tenth of a percent less than in the 2017 election – were decided by just 260,000 votes among the country’s 44 million eligible voters and were the closest in the past 35 years since South Koreans have able to vote freely.

Yoon, 61, has had a brilliant career as a prosecutor over the past 25 years, during which he put many of the country’s most powerful figures in the dock and secured prison terms for corruption against conservative ex-Presidents Lee Myung-bak and Park Geun-hye, the latter of whom was removed from office in 2017.

After being named attorney general during the mandate of current President Moon, Yoon indicted former Justice Minister Cho Kuk and faced off against the administration, resigning early last year under political pressure and officially announcing his presidential campaign in mid-2021.

Yoon evidently has been able to capitalize on the discontent aroused by Moon among many South Koreans over the real estate crisis, the increase in inequality and the fact that people are largely fed up with anti-Covid restrictions which have harmed small businessowners, although the virus still remains rampant in the country with some 300,000 new cases being detected each day.

After a campaign loaded with scandals and condemnations in which the two favored candidates have remained neck and neck in the voter surveys, the 58-year-old Lee acknowledged his defeat minutes before the NEC announced Yoon to be the winner, and he congratulated his rival in a statement that he read at the headquarters of political grouping, the Democratic Party.

After the NEC announcement, Yoon left his home and briefly appeared before the camera to thank his voters for their support before heading to his own political bloc’s headquarters, the People Power Party, in Seoul’s Yeouido district.

Yoon is scheduled to be inaugurated on May 10. 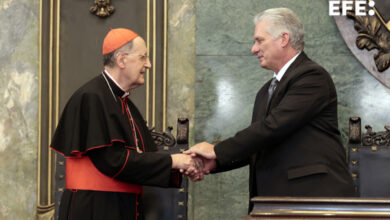