United Nations, Sep 22 (EFE).- British Prime Minister Boris Johnson used his speech to the UN General Assembly on Wednesday to ask the world to agree on more ambitious measures to combat climate change and said COP26 must be a “turning point for humanity.”

Johnson said it is time for humanity to “grow up” and take responsibility for the destruction it is inflicting on the planet.

“We will have made this beautiful planet effectively uninhabitable – not just for us but for many other species,” he told the UNGA.

“And that is why the Glasgow COP26 summit is the turning point for humanity,” the conservative leader insisted, in a imaginative speech full of metaphors and jokes that he dedicated exclusively to climate change.

“The world – this precious blue sphere with its eggshell crust and wisp of an atmosphere – is not some indestructible toy, some bouncy plastic romper room against which we can hurl ourselves to our heart’s content,” he added.

A little over a month before COP26, Johnson insisted to all governments on the need to present stronger commitments to limit temperature rise and avoid the worst consequences of global warming.

Johnson highlighted the importance of climate announcements made this week by powers such as the United States and China, but warned that this is not enough, and urged all countries to commit to significant emissions reductions by 2030.

“I am not one of those environmentalists who takes a moral pleasure in excoriating humanity for its excess,” Johnson said.

“I don’t see the green movement as a pretext for a wholesale assault on capitalism.”

In that sense, he said that the Covid-19 pandemic has once again shown that the way to solve big problems is with science and innovation, advances that he said are possible due to the free market.

In the case of climate change, he insisted, the technologies are already available and the world has all the tools for a “green industrial revolution.”

Johnson, who also cited Sophocles throughout his speech, closed it by saying The Muppets’ Kermit the Frog was wrong when he sung “It’s Not Easy Being Green.”

“It IS easy, it’s easy, it’s lucrative and it’s right to be green. Although he was unnecessarily rude to Ms Piggy, I thought.” EFE 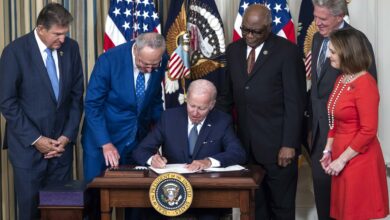