Madrid Desk, Mar 1 (EFE).- Disney, Warner Bros and Sony Pictures suspended upcoming releases in Russia amid an international backlash over the country’s invasion of Ukraine while Google and Facebook’s parent company Meta on Monday announced they would block access to Russian state-affiliated channels RT and Sputnik.

The Walt Disney Company said in a statement that the theatrical release of Pixar movie Turning Red would be suspended in Russia due to the “unprovoked invasion of Ukraine and the tragic humanitarian crisis.”

“In the meantime, given the scale of the emerging refugee crisis, we are working with our NGO partners to provide urgent aid and other humanitarian assistance to refugees,” the statement continued.

Soon after the Disney statement late Monday, Warner Bros said it would halt the release of its upcoming movie The Batman, starring Robert Pattinson and Zoe Kravitz, while Sony Pictures announced the same measure with its upcoming releases, including Morbius.

Streaming service Netflix said in a statement that it would refuse to comply with Russian legislation applicable from Tuesday requiring it to carry 20 state-affiliated channels.

Joining the flurry of Western companies looking to distance themselves from Russian operations on Tuesday was Google Europe, which said on Twitter that it would block YouTube channels linked to Kremlin-affiliated outlets RT and Sputnik “effective immediately.”

“It’ll take time for our systems to fully ramp up. Our teams continue to monitor the situation around the clock to take swift action,” the United States tech giant said.

Meta, which owns Facebook, Instagram and WhatsApp, announced shortly after that it would also block Russian state-affiliated media from its outlets at the behest of the European Union.

The reaction from the Western media industry comes as the EU, the US and their allies ramped up sanctions on senior Russian officials and the country’s financial institutions by cutting several lenders off from the international transfer system Swift and freezing foreign assets held by the central bank.

Credit card companies Mastercard and Visa, oil giants Shell and BP and shipping company Maersk are among a number of others that have canceled or suspended operations with Russia. EFE 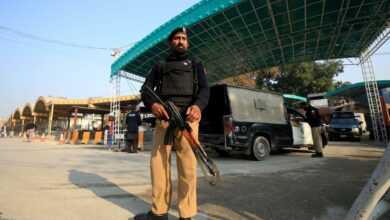