The Healthy Seas and Ghost Diving organizations have reported that of that waste, 18.5 tons were fishing nets from a fish farm that dumped nets, rings and floats when operations ceased and the apparatus was sunk to the bottom of the sea.

The result is “ghost fishing”, a term used to describe the underwater death traps that end up killing many marine animals every year. The nets trap turtles, fish, birds and dolphins and become entangled in reefs and corals.

“The main difference of this ghost net cleanup project is that the owner of the abandoned fishing gear we discovered and removed, has a name,” Veronika Mikos, Healthy Seas director said.

“We have confronted this environmental crime 2 years in a row, worked toward restoring it, as well as understanding who is responsible and in a position to do something about it. The matter is very complicated,” she added.

The organizations said the recovered nets would be recycled and converted into material for socks, swimsuits and rugs.

“Everyone on Ithaca is grateful to Healthy Seas and Ghost Diving for their efforts to protect our island two years in a row,” said George Lilas, a local environmentalist who alerted the organization of the environmental destruction.

The United Nations Environment Program says some 640,000 tons a year of fishing gear end up in the seas and oceans every year. EFE 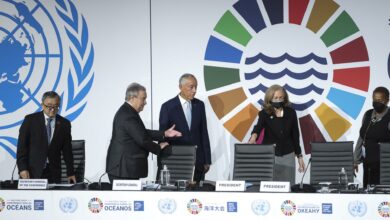 Guterres urges world to ‘turn the tide’ amid ocean emergency

EU seeks to slash use of pesticides in half by 2030