Dubai, Oct 1 (EFE).- The Dubai Expo 2020 opened to the public Friday after it was postponed for a year by the Covid-19 pandemic.

Organizers hope that 25 million people visit the exposition over the next six months.

The pavilion dedicated to the world fair’s host country, the United Arab Emirates, which explores the history of the country on the 50th anniversary of its founding as well as the future of the oil-rich nation, was one of the most popular on opening day.

Designed by Spanish architect Santiago Calatrava, the pavilion was inspired by a falcon, the national symbol of the UAE.

Visitors are greeted by real sand dunes in the pavilion’s first room while an outside zone plays host to an oasis-like area of palm trees and water.

The efforts to stage an impressive expo have not spared Emirati authorities from controversy and criticism over the country’s human rights record.

“Expo 2020 is yet another opportunity for the UAE to falsely present itself on the world stage as open, tolerant, and rights-respecting while shutting down the space for politics, public discourse, and activism,” said Michael Page, deputy Middle East director at Human Rights Watch, in a statement.

The UAE, and Dubai in particular, project a progressive and tolerant image compared to its Middle Eastern neighbors. The UAE became the first Arab and Muslim country to host the world fair.

Covid-19 continues to be a challenge for organizers, not so much at the event itself, where PCR tests and vaccine certificates are required for access, but rather it makes it harder to attract visitors from around the world. EFE 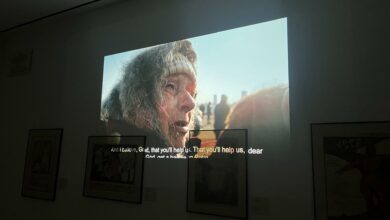