The Hague, Apr 29 (efe-epa).- Planting flowers in gardens and on balconies helps save endangered species by providing food to wild butterflies and bees who struggle to survive in urban spaces, The Netherlands Government and environmental NGOs said.

The Friends of Bees Foundation and other organizations have launched a campaign to encourage the Dutch to plant flowers outdoors because “half of wild bees are in serious danger”.

There is little food available in the wild and scant variety so they need the help of citizens to stay alive, the foundation said.

The rules are easy: choose indigenous plants that have been grown without pesticides; select various seasonal flowers so you have blooms throughout the year; sow them in clean soil free of vegetation and in a sunny area conducive to nesting.

Cities are harsh places for these insects to thrive, but things in the countryside are not much easier.

Their natural habitat is suffocated by pesticides and intensive agriculture.

Dutch Prime Minister Mark Rutte joined a group of primary school children to sew seeds on the edge of a small canal next to Catshuis, the official residence of the PM.

“Make sure to plant. If you have an empty piece of garden or have a balcony at home, don’t hesitate to plant flowers. It’s really nice, it’s great,” said Rutte, who was recorded on Dutch NOS television cameras while he watered what they had planted and then went with the children to visit a beehive at a farm in The Hague.

According to the foundation, “as many as 40 percent of the world’s insect species are declining. Insects are facing extinction rates eight times higher than vertebrates”.

Some suffer due to lack of food, others as a result of the climate emergency.

“It is especially important for the wild bee. Bees need food and urbanization makes it increasingly difficult to find. By not being able to fly that far, it has a smaller area to find food. If we all plant, they will have more possibilities,” according to Martin Stugers, a gardening specialist.

Bees have distinct preferences. They like individual flowers with stamens and pistils like poppies, clover, marigold, and sunflowers.

These are all easy to care for plants and now is a perfect time to get planting.

Holland has some 360 ??species of wild bees and more than half are endangered.

The potential threat of losing this species or seeing a great decrease in their numbers will pose a danger to the production of natural foods.

Around 80 percent of edible crops are pollinated by bees and other insects, something that also ensures the reproduction of wild plants, but pollinators need enough pollen and nectar.

The Friends of the Bee Foundation and the Party for the Animals have launched a parallel program to raise awareness of these insects among children and are looking for schools to host “bee hotels” in their grounds.

So far the initiative has been successful with more than 120 hotels and various schools signing up.

The project aims to teach children about butterflies and wild bees, showing them that the bugs rarely sting and fruit would not exist were it not for pollination. 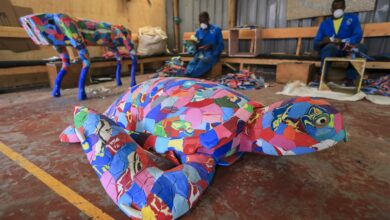 Garbage collectors, the hidden heroes of recycling in Cairo

COP27 must reach agreements to respond to climate crisis: Guterres