The cabinet expansion included 17 new ministers appointed two weeks after the previous cabinet stepped down en masse as anti-government protests escalated against the alleged economic mismanagement that has now resulted in a sovereign debt default and shortage of essentials.

“I have appointed new ministers without considering the seniority. A minister’s portfolio is not a privilege. It is a huge responsibility. I urge you not to use any privileges as a minister,” President Rajapaksa said in an address to the new cabinet.

“I expect you will devote yourself to honest, efficient, and clean governance. Today, most of the state institutions are facing a grave financial crisis. It is very important to rectify this situation,” he said.

Urging the protesting youth to assist in the process, he said the new cabinet was a “good opportunity” to bring in changes people were expecting in the country of 22 million.

The cabinet appointments were held at the president’s official residence since he cannot use his office, where thousands of youth-led protesters are on a sit-in demanding his ouster.

However, the protesters were little enthused by the new cabinet as a way forward to address the economic crisis.

“We want Gota to resign and there is no compromise in that,” A. Duminda, a protester, told EFE, carrying a placard saying, “Go Gota Home.”

“This is just a change of face. We have lost confidence in this system. We will not compromise on our demand for Gota’s resignation,” he said, referring to the president’s first name.

Late on Sunday, protesters flashed the “Go Home Gota” slogan on the office building using a projector to reflect their anger over the government’s failure.

Later, the president’s security division installed a board to prevent the projector from flashing the message on the official building.

Rajapaksa has defied the calls for him to step down.

The protests began after a shortage of fuel, medicine, cooking gas, and milk powder amid depleting foreign reserves that deprived the country of importing essentials due to a severe dollar shortage.

The crisis has also led to extended daily power cuts.

Sri Lanka’s Colombo Stock Exchange (CSE) closed the market for five days until Apr.22 in an unprecedented move to help investors grasp the situation after the default.

The country’s banks could not repatriate the money in foreign currency since July last year even after the offshore investors sold their stakes and asked to send their proceeds, said Fernando. EFE 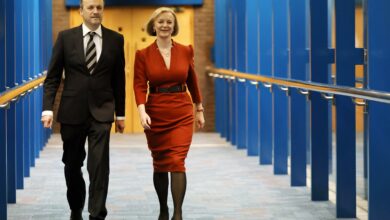