Krakow, Poland, May 5 (EFE).- The president of the European Commission, Ursula von der Leyen, on Thursday announced aid worth 200 million euros for people who have been displaced by the war in Ukraine.

“The brutality of Russia’s aggression is shocking the world,” Von der Leyen said, adding that she had witnessed it “with (her) own eyes” when she visited Bucha to “see the mass graves, to see the body bags, to see the scars and wounds in the houses and hospitals that have been shelled.

“It is atrocious. It is a war crime on an everyday basis that Russia is committing,” she added.

During her speech, the EC president referred to the sixth package of sanctions against Moscow, unveiled on Wednesday, which includes a total ban on the import of Russian oil.

These measures are “biting deep into the Russian economy,” she said. “(Russian president Vladimir) Putin has to pay a price for this aggression.”

“We cannot match the bravery and the sacrifice of the Ukrainian people. But we can back you, we can help you with our economic power,” von der Leyen said, pointing out that the European Union “has mobilized 3.5 billion euros” and has managed to get “4 billion” to Ukraine.

Morawiecki, meanwhile, said the event showed “that we are not indifferent to the suffering caused by this unjust and brutal war” and emphasized the close relations between Warsaw and Kyiv.

He also called for Ukraine’s status as a candidate country for fast-track EU membership and demanded “more funds, more aid and more sanctions against Putin.”

“Ukraine needs 12 tons a day of humanitarian aid,” the Polish leader emphasized, “and right now it is only receiving 25% of that.”

Morawiecki referred to the “more than three million people”, mainly women and children, who have crossed the Polish border from Ukraine and welcomed the fact that they have been able to “escape the horror of war” in Poland. EFE 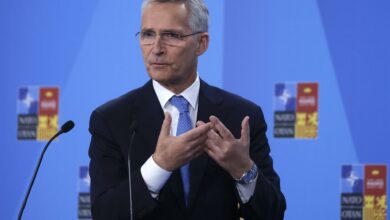 Ukraine can count on us for as long as it takes: Nato chief