Los Angeles, Sep 28 (EFE).- A former member of a Mexican-based evangelical megachurch known as La Luz del Mundo (Light of the World) who once blindly obeyed its now-jailed leader and “apostle,” Naason Joaquin Garcia, now says she sees him as no more than a criminal.

In an interview with Efe, Sochil Martin recalled that after belonging to the church for nearly 30 years and rising to the position of Garcia’s assistant she became the first woman to file formal sex-crimes charges against him in the United States.

The 52-year-old Joaquin Garcia has been jailed in Los Angeles since June 2, 2019, on charges of sexual abuse of minors, child pornography and human trafficking – crimes that allegedly occurred in Southern California between 2015 and 2019.

His trial had been scheduled to start on Monday, but in a preliminary hearing a few days ago his attorneys convinced the judge they needed more time to prepare their defense. The trial is now slated to begin on May 9, 2022, with Joaquin Garcia in custody on a California record $90 million bond.

Martin also attended that hearing and for the first time in five years was in the same room with Joaquin Garcia, a man who had been her spiritual leader, boss and, according to her allegations, her abuser.

“I saw a criminal, a man (who’s) nothing,” Martin said of the leader of a megachurch whose reach extends to nearly 60 countries.

She added though that she also caught a glimpse of a “broken boy, a boy who at one time also was abused, who grew up in a very terrible institution,” made the wrong decisions and “did not stop the cycle of abuse” of his father and predecessor as church leader, Samuel Joaquin Flores.

Now 34, Martin said she began to suffer all kinds of abuse at the hands of Joaquin Garcia from the age of 16. The last incident she recalls occurred in 2016 after she told him before he left on a trip that she would miss him.

“He said, ‘show me how much you’re going to miss me'” and then sexually assaulted her, she added.

Martin, who was married at that time to a member of the church and had a young daughter, said she did not realize then that she was a victim of abuse.

“It sounds illogical, or maybe stupid, but I didn’t know.”

That confusion, according to Martin, is common among many church members because, for whom “(the abuse) is OK because it’s for the servant of the Lord (Joaquin Garcia).”

A member of a family that belonged to La Luz del Mundo for several generations, she said the indoctrination begins at a young age.

“They teach you when you’re very little. They read you (Biblical) passages and make you believe there’s nothing wrong with what you’re doing, that it’s a crown in heaven,” said Martin, who in a civil suit in Los Angeles accused church leaders of forcing her to recruit other girls and young women to satisfy Joaquin Garcia’s desires.

Despite the nature of the 19 sex-crime charges filed against the megachurch’s leader and the evidence presented in preliminary hearings in California, La Luz del Mundo’s millions of members worldwide appear to be firmly on his side.

In a statement sent to Efe on Sept. 17, the church said Joaquin Garcia is innocent of the charges and that prosecutors had concealed “exculpatory evidence” for two years before finally agreeing to provide it to his defense team.

But Martin said there is a economic motive behind the church hierarchy’s insistence on the leader’s innocence, adding that they are there to “keep the business going.”

Martin, who expects to attend the trial, said she will continue to denounce the abuses committed within her former church and encourage other members to join her in ensuring justice is served.

“I don’t feel tired in the slightest,” she said, though adding she fears the consequences if Joaquin Garcia is acquitted. 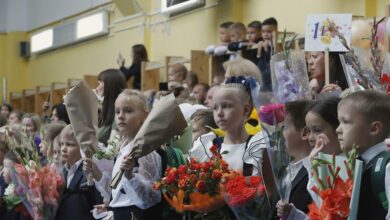 At least 9, including 5 children, killed in central Russia school shooting

The forgotten victims of Ayotzinapa