Hong Kong/Taipei, Sep 11 (efe-epa).- Hong Kong has turned from a city of refuge into a city creating refugees, from a safe destination for Chinese dissidents to a departure point for activists and political opponents, as the former British colony witnesses an unprecedented exodus following Beijing’s recent imposition of a contentious national security law.

“This is a clear indication of Hong Kong’s decay and the destruction of its autonomy under Chinese rule. It’s all very ironic. But then that’s something bound to happen under an authoritarian rule,” Nathan Law, one of the most prominent activists of Hong Kong, currently in exile in Germany, told EFE.

In just over a year, Hong Kong has gone from being an open city, an oasis of freedom in the desert of Chinese authoritarianism to having its police – once considered the best in the continent – detain its citizens for offenses such as chanting pro-independence slogans.

Thus, many have embarked on the painful path of exile.

“Leaving Hong Kong is in itself an immensely difficult thing to do. For one thing, you have to cut contact with your friends and family or you’d be putting them in danger. To adapt to that is not easy,” said Law.

On Aug.26, the Guangdong Coast Guard posted a message on social media that a motorboat had been intercepted on the morning of Aug.23, and that its occupants – some dozen of them – were arrested on suspicion of crossing the border illegally.

According to the press in Hong Kong, the boat – with at least one activist previously arrested on board – was headed for Taiwan, the closest destination among places with conditions similar to Hong Kong.

In light of the situation, Taiwan – governed autonomously since 1949 but claimed by Beijing, which does not rule out using force to achieve reunification – has set up the Taiwan-Hong Kong Office for Exchange and Services for people fleeing the former British colony.

Since its creation, on July 1, the Office claims to have received more than a thousand inquiries related to immigration and permanent residence.

According to the Mainland Affairs Council of Taiwan, 3,876 people from Hong Kong moved to Taiwan between January and July this year, more than double the number than in the same period in 2019. However, it remains to be known how many of them were dissidents.

The Taiwan Association for Human Rights (TAHR) seeks to help those trying to flee Hong Kong and those who choose to apply for refugee status, a process they say is complex.

“Before the coronavirus epidemic broke out in spring, Hong Kong people could apply online for a tourist visa and enter Taiwan. Once in Taiwan, they can apply for refuge but must prove they are bonafide dissidents,” TAHR’s legal advisor Wang Si told EFE.

Due to the Covid-19 crisis, trips between Hong Kong and Taiwan were almost completely canceled, which affected those seeking refuge in Taiwan.

This led to many incidents like that of the intercepted boat. Many of those fleeing have been doing so illegally, some without even a passport, in many cases confiscated by the police.

“Because of that, we hope the Taiwan government can be more flexible in verifying Hong Kong dissidents’ status,” added Wang.

In April, some Taiwanese people helped a group of Hong Kong dissidents to open a restaurant to help them earn a living and start afresh.

The restaurant – whose owner confessed that he was having a difficult start – is named Aegis and on its walls appear slogans such as “Free Hong Kong” and images denouncing police brutality, and in which the police are labeled “murderers.”

To raise funds to help more activists, the restaurant’s owners have opened a second-hand clothing store that also sells its products online. Between these two businesses, they employ about 20 people.

Wong Mau-chun, a 29-year-old protester, was also looking to escape to Taiwan but he discarded the plan after analyzing the risks, and ended up arriving in London in July – shortly before his court appearance – to the surprise of many, who believed him to be in police custody. 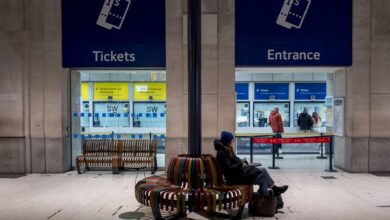