Buenos Aires, Mar 18 (efe-epa).- Fito Paez has everything he needs to be considered a Spanish-language rock legend. He didn’t have a “regular” Grammy, but he remedied that last Sunday amid a “whirlwind” of events – as he told EFE – that included one of his most fulfilling moments.

“The only thing I want is not to become a living statue,” he said, trying to get away from the idea of being a star.

“I’m running from being an icon, the legend, all that … I’ve known lots of artists, writers, musicians and composers who put on airs. … That life lasts only a little while. … The important thing is on the other side, not here,” the prolific Argentine singer-songwriter, who last Saturday turned 58, told EFE.

The next day, he won his first US Grammy – although he already had nine Latin Grammys – for best Latino rock or alternative album for his latest production, “La conquista del espacio” (The conquest of space), his 24th.

“It was a whirlwind that goes through your house. The telephone begins to ring and it doesn’t ever stop. It’s all love,” said Paez, who is also a writer and filmmaker.

Neither US culture nor the US public are unfamiliar to him. First, because as a boy his father discovered his musical talent, and he immersed himself in music more and more over time, and second because of the times during his four-decade career when he has turned out albums in the US with key figures such as producer Phil Ramone.

“When they accept you, acknowledge you and invite you to have a drink at their home, it’s all very comforting,” he admitted.

Apart from his gratitude for his awards, the countries he’s visited and the success of numbers like “Mariposa tecknicolor,” “11 y 6” and “Llueve sobre mojado” – the latter with Joaquin Sabina – the artist, who turned out his first songs in his native Rosario in the late 1970s, is focusing on the present and already has work lined up “for the next two or three years, at least.”

During the pandemic, he finished writing a film script, composed an album that he will record in July and prepared another instrumental orchestral album based on “Los siete locos” by Argentine writer Roberto Arlt.

But he also gained 10 kilograms (22 pounds) – he said laughing – over the five months he spent writing his autobiography.

“That was really a whirlwind, a huge mountain of emotions: I cried, laughed, got excited, felt euphoric, downgraded myself, I said … ‘this is crap,’ and the other day it seemed to me to be a work of genius,” he said.

He prepared much of the book on his own – “because a big part of my work off the stage is in private” – and it will probably be published next year, at the same time that Netflix is preparing a fictional series about his life titled “El amor despues del amor” (Love after love), from the album he released in 1992 and which is the highest-selling Argentine rock album of all time.

That was a time of “great fulfillment” that marked him forever. “It was a very similar beautiful moment to this one (but) without kids, younger. It was a great time together with Cecilia Roth – we were a couple for many years and had Martin,” he recalled.

“I thought that those times would never happen again. And OK, yes they’re happening! On the other hand, things with a little luck could go in cycles,” he said regarding his present situation, now that he’s middle aged.

He has two children – “they’re fine, healthy and busy” – and said “I hope so” when asked if they admire him. “I don’t think I’m as good a father as they make out, but I’m not so bad either,” he said, noting that he took them on tour with him and thus was able to spend lots of time with them and help raise them.

And when asked how he’d like to be remembered, he said, with that eternal smile, “As a scoundrel from Rosario.” 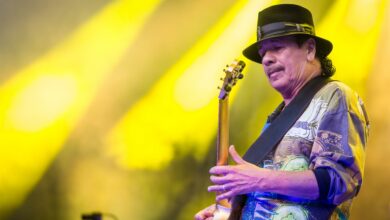