Parliament Speaker Azhar Azizan Harun said in a statement that Najib would not lose his parliamentary seat until a decision is reached on his petition for a royal pardon, which was presented by his lawyers Friday.

Najib, admitted to hospital Sunday for an undisclosed ailment, has been in prison since Malaysia’s Federal Court upheld the 12-year sentence against him on Aug. 23 for misappropriating MYR 42 million ($9.42 billion) from the state fund 1Malaysia Development Berhad (1MDB.)

He was also ordered to pay a MYR 210 million fine.

The ex-prime minister, who ruled from April 2009 to May 2018, pleaded not guilty to the 1MDB accusations, as well as abuse of power and trust, and money laundering over the diversion of millions to his private accounts.

The former president’s wife, Rosmah Mansor, was also sentenced Thursday to 10 years in prison for accepting bribes in connection with a project to supply solar energy to 369 rural schools in the state of Sarawak, on the island of Borneo.

Najib faces four other trials in the 1MDB scandal, the largest corruption case in the country that came to light in 2015, when a newspaper investigation exposed the multi-million dollar diversion from the state fund to the private accounts of Najib, the fund’s founder.

According to police investigations, Najib and his associates allegedly diverted $4.5 billion from the Malaysian state’s investment arm into their private accounts, a scandal that led to his fall from power after losing the elections on May 10, 2018.

Three days later, Najib and his wife tried to board a plane for Jakarta but were banned from leaving the country by then-Prime Minister-elect Mahathir Mohamad and authorities began investigating the 1MDB scandals.

Najib, the first Malaysian prime minister to be imprisoned, is the son of one of Malaysia’s founding fathers, Abdul Razak Hussein, who served as prime minister between 1970 and 1976. EFE 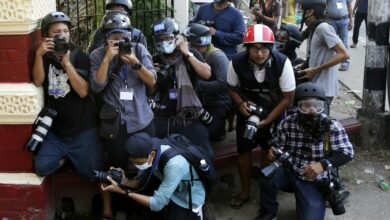