Paris, Jan 23 (EFE).- The French government said it would make some adjustments to controversial pension reforms but refused to delay the new minimum retirement age of 64 despite fierce opposition.

The government’s objective is to restore an economic “balance” to France’s embattled pension system by 2030, labor minister Olivier Dussopt told reporters after a pensions reforms bill was adopted by the cabinet on Monday.

When asked whether the legislation would be modified as it goes through parliament and the National Assembly next week, Dussopt said that “many requests” had already been included in the bill.

He said that the increase to the minimum state pension to 1,200 euros per month in 2023, from the current 950 euros, will apply to both future pensioners and current ones.

But when asked whether concessions had been made to proposals to delay the retirement age to 64, he said that this is “what allows financial equilibrium” and that “giving up that point would mean giving up the balance.”

The French government has designed its new pensions plan using data from the Pensions Advisory Council (COR) which has warned that if left unchanged the current system will go bankrupt.

All of France’s trade unions have rejected the plans to delay the retirement age and have retaliated by organizing mass walkouts and protests that brought between one and two million people to the streets on January 19. Further industrial action has been slated for January 31.

The labor minister insisted that the reforms will make it possible to “correct a certain number of inequalities.” 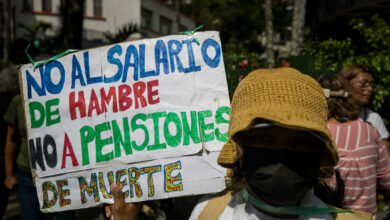