Lobios, Spain, Feb 13 (EFE).- An abandoned ghost town has emerged in the Lindoso Reservoir, on Spain’s northern border with Portugal, as a drought has almost emptied the dam attracting crowds of tourists keen to get a haunting selfie.

The Lindoso reservoir was created three decades ago when the towns of A Reloeira, Buscalque, O Bao and Lantemil were flooded in 1992.

Decades later the ruins have re-emerged from the waters, in a spectacular and desolate landscape that has visitors awestruck.

“We came from Santiago to spend the day. The truth is that I think it is spectacular, it is very well preserved,” one visitor who came to visit the site with his partner after seeing footage of the area on television.

“We came from Vigo, we saw the emerged town and decided to stop to see it. We had seen something on television, but seeing it ‘in situ’ is impressive,” a group of motorcyclists added.

For neighbors and former inhabitants of the affected villages, the images of the frozen landscape evoke sadness.

Maribel Paz, a resident of Ponteareas who remembers how on 8 January 1992 residents of Aceredo were forced to leave everything behind when the Portuguese power company EDP filled the dam, visited the ruins with her family.

“It is worth seeing, it is like being in a lunar landscape. But the people who had to leave are also very sad, they must have really suffered.”

Locals are the most critical when discussing how the construction of reservoirs in Galicia (northwest) has affected residents.

“This is a disaster, it reflects how they savagely emptied the reservoir,” says Francisco, a resident of Xinzo de Limia (Ourense).

Tourists from Portugal have also been drawn to the dam.

“We came for a walk encouraged by the images that many people were sharing on social networks,” a young woman, who says she cannot help but think with sadness what the village might have been like before, adds.

EDP has asked Ourense municipality authorities to prevent visits to the houses that have resurfaced on the cross-border dam.EFE 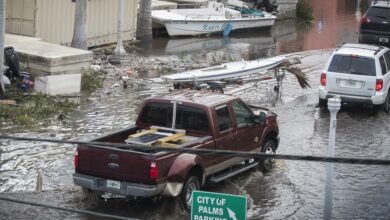