Caracas, May 17 (EFE).- The Guinness World Records organization on Tuesday certified Venezuela’s Juan Vicente Perez Mora, aged 112 years and 354 days, as the world’s oldest man, a title that he receives just 11 days before his 113th birthday.

Perez Mora was born in the state of Tachira, which borders on Colombia, on May 27, 1909, and since 2020 – when EFE made his story known – he has been waiting to be certified as one of the world’s five oldest men.

The validation of his status, Guinness confirmed, came on Feb. 4, when he was 112 years and 253 days old, although the announcement was only made Tuesday on the organization’s social network accounts.

Over the past two years, the men who had been slightly older than Perez Mora have died.

The new record-holder has always lived in a mountainous zone of Tachira, where he worked in the fields for more than 50 years. There he also married and had 11 children by Ediofina Garcia, who died in 1997 after 60 years of marriage.

Currently, Perez Mora enjoys good health and does not suffer from any ailments that require medical treatment.

His relatives created a profile of him on Instagram in which they included photographs and videos of the popular “Tio Juan” (Uncle Juan) eating his habitual “empanadas” (meat pies), praying the rosary or talking with his grandchildren, nephews and nieces.

Perez Mora’s greatest wish is to keep on living for a few more years, or at least that’s what his closest relatives told EFE in a 2020 conversation. 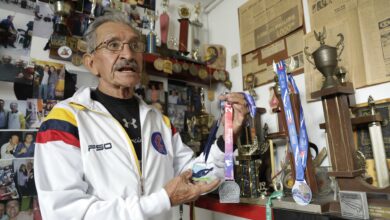