Port-au-Prince, Jul 20 (EFE).- Haiti’s new prime minister used the occasion of his swearing-in ceremony Tuesday to call for dialogue with the opposition in pursuit of a way out of the long-running crisis that deepened 13 days ago with the assassination of President Jovenel Moise.

Ariel Henry, a neurosurgeon, was named premier by Moise on July 5, but had yet to take office when the president was slain in the wee hours of July 7 and acting Prime Minister Claude Joseph rushed to present himself as the rightful interim leader.

On July 8, the United Nations special envoy for Haiti said that the world body recognized Joseph as acting head of the government.

But neither the United States nor any of the other entities making up the so-called Core Group on Haiti – Brazil, Canada, France, Germany, Spain, the Organization of American States (OAS) and the European Union – explicitly recognized Joseph.

Last Saturday, the Core Group ambassadors and representatives in Port-au-Prince issued a statement that encouraged Henry to “continue the mission entrusted to him to form … a consensual and inclusive government” in Haiti.

In his first speech as premier, Henry described his 18-member Cabinet as “inclusive,” pointing to the presence of opposition figures, technocrats and notables.

Yet Henry has retained the incumbents at the justice and economy ministries, while Joseph is resuming his previous post of foreign minister.

That element of continuity and the Core Group’s embrace of Henry has made some opposition sectors, notably on the left, suspicious toward the new government, while a group of activists seeking to reduce the role of foreign powers in Haitian affairs repudiated the administration.

“The Commission of Civil Society has nothing to do with the formation of the government; it has not come out of any consensus with civil society actors who are united to find a #HaitianSolution to the crisis. The individuals in this Cabinet don’t represent anyone but themselves,” the group said in a statement.

Emerging from the crisis “must involve all Haitians,” Henry said Tuesday.

“We don’t aspire to solve all the problems, but with democrats we can create the conditions for the organization of elections,” the prime minister said, without offering any timetable.

He pledged to make tackling crime a priority as Haitians find themselves terrorized by well-armed gangs with links to rival factions within the political and economic elites.

The installation of Henry coincided with the start of official observances in honor of the murdered Jovenel Moise, who is to be laid to rest Friday at his family’s crypt in the northern city of Cap-Haitien.

All of the members of the outgoing and incoming administrations were present for a ceremony in Port-au-Prince, though the president’s widow, Martine Moise, did not attend.

The erstwhile first lady was badly wounded in the attack that ended her husband’s life and only returned to Haiti last Saturday after spending more than a week at a hospital in Miami. 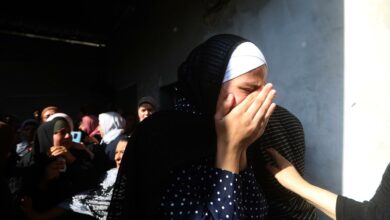