Thousands of people took to the streets for the fifth consecutive day to demand the end of the military junta, which staged a coup on Feb. 1, and the release of detained democratic leaders, including the Nobel Peace Prize laureate and ousted leader Aung San Suu Kyi.

“Reject the coup,” “Please listen to our voices,” “Fight for democracy” read some of the placards held by protesters on Wednesday in Yangon, the former capital of Myanmar and its most populated city.

One teenager said she had walked 20 kilometers to get to the protest, against her parents’ wishes.

“We’re protesting to free Daw Aung San Suu Kyi and the president. I’m not afraid of anyone… if we don’t fight now we’ll be under curfew for our lifetime,” the 17-year-old told EFE.

A 34-year-old man standing face-to-face with police in the front line of a demonstration told EFE he had quit his job as a supervisor at a mobile phone shop on Tuesday and the curfew put in place by the military junta to curb dissent would not stop him from protesting.

“I’m not afraid of them and any laws under the military. And I have no family to look after, so I will be here until they release our leaders,” he said.

A 16-year-old girl demonstrating with her parents said she felt strong being there with her family, adding: “My dad also experienced this kind of situation, so he encouraged me.”

Also in Yangon, around a dozen demonstrators lay down on a road, pretending to be dead to denounce police violence, while another group held a symbolic funeral for General Min Aung Hlaing, who led the military coup.

Many protesters wore construction helmets for protection as they marched, and others were seen carrying photos of Suu Kyi and holding up the three-finger salute, a symbol of resistance.

Monks also joined protests in Yangon and Mandalay, according to local media, while demonstrations were also taking place in Naypyitaw, Bago and Kayah state.

A young woman was critically injured in Naypyitaw Tuesday afternoon after being struck in the head by a bullet. She was rushed to a local hospital.

In a report issued Wednesday, Human Rights Watch said it had verified pictures and videos from the scene, and had spoken to a doctor at the hospital.

According to the doctor, the watchdog said the woman had “a projectile lodged in her head and had lost significant brain function. He said the wound was consistent with that of live ammunition, and that a metal bullet had penetrated the back of the right ear, and stopped on the left.”

A young man was being treated at the same hospital for an upper body wound “consistent with that of live ammunition” after he was injured at the same protest, it added.

“Myanmar police shooting at a woman demonstrator whose back was turned is unconscionable as well as unlawful,” said Richard Weir, HRW crisis and conflict researcher. “The police need to stop responding to peaceful protests by firing off guns and immediately investigate alleged wrongful use of force.”

Late Tuesday the United Nations in Myanmar said the “use of disproportionate force against demonstrators is unacceptable.”

“I call on the security forces to respect human rights and fundamental freedoms, including the right to peaceful assembly and freedom of expression,” Ola Almgren, UN resident coordinator and humanitarian coordinator in Myanmar, said.

He also urged the military leadership to respect the will of the people of Myanmar and adhere to democratic norms. 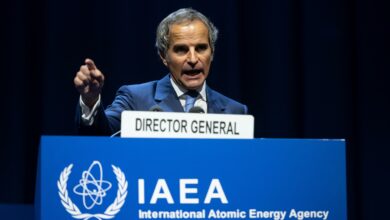