New Delhi/Dhaka, May 20 (efe-epa).- India and Bangladesh were bracing for super cyclone Amphan to make landfall on Wednesday after the authorities evacuated tens of thousands of people from coastal areas.

The super cyclone was located “about 120 km (74.6 mph) east-southeast of Paradip (Odisha in India), 200 km south of Digha (West Bengal), and 360 km southwest of Khepupara (Bangladesh),” according to an advisory by the World Meteorological Organization.

It added that Amphan would cross the coasts of West Bengal and Bangladesh between Digha and Hatiya Islands (Bangladesh) in the afternoon to evening hours with a maximum sustained wind speed of 155-165 kmph gusting to 185 kmph.

In India, the authorities expect the cyclone to make landfall at 4 pm.

In Bangladesh, disaster response teams “have completed the evacuation of around 500,000 people in 13 districts,” Nur Islam Khan, head of Bangladesh’s of Cyclone Preparedness Programme, told EFE.

“It has been raining in many areas. People are also coming to the shelters slowly.”

He added that rough weather conditions were hampering the evacuation process to some extent but their volunteers were putting in their best efforts to bring people to safety.

This is the most intense cyclone in the region since 1999, and comes amid the COVID-19 crisis, making evacuation process complicated given the lockdown and social distancing measures in force to check the spread of the infection.

“This is the first time that we are facing two disasters together. A shelter which usually houses 1,000 people, might be able to house only 400-500 people due to social distancing and needs to be sanitized,” said Satya Pradhan, the director-general of India’s National Disaster Response Force.

Pradhan said the NDRF had begun evacuations and stationed 34 emergency teams in the states of West Bengal and Odisha, while seven teams were deployed as reserves.

Ravi, who has been overseeing disaster preparedness operations in West Bengal, revealed that although they were taking precautionary measures such as using personal protective equipment, masks, and hand sanitizers, “small compromises have to be made because it is not possible to adhere to complete social distancing norms in this situation.”

In Bangladesh, Mohammad Mohsin, director-general of the Disaster Management Department, had earlier said that apart from regular cyclone shelters, they were also using local schools and colleges across 19 coastal districts as makeshift shelters to maintain social distancing amid the coronavirus epidemic.

Amphan could become the most powerful cyclone in the Bay of Bengal – prone to these storms during April-May and October-November – since a devastating super-cyclone in 1999 killed more than 9,000 people in Odisha.

Since then, advanced technology and warning systems have helped authorities bring down casualties drastically.

In November, the Cyclone Bulbul killed at least four people and affected both India and Bangladesh, while in May 2019 Cyclone Phani left at least 14 dead in the two countries. EFE-EPA 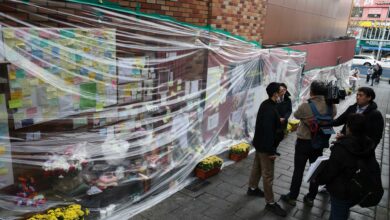 2 die, several missing after landslide washes away 15 vehicles in Brazil