New Delhi, Jun 2 (efe-epa).- India on Tuesday was in the process of evacuating thousands of citizens from low-lying areas along its western coast, a day before severe cyclonic storm “Nisarga” was expected to make landfall near Mumbai, the country’s financial capital, officials said.

As per officials contacted by EFE, at least 51,000 people were being evacuated from the coastal states of Maharashtra – which has Mumbai as its capital – and Gujarat, although the figure could rise further as both states have been put on alert and rescue and relief teams have been deployed across the region.

“We have already shifted 20,000 people to around 45-50 shelters,” NA Rajput, the additional collector of Gujarat’s Valsad district, told EFE.

In the neighboring Navsari district, Additional Collector PR Jani said that 10,000 people were set to be evacuated by Tuesday night, out of which around 4,700 people had been moved to safety by 6 pm.

In Maharashtra, apart from Mumbai and its suburbs, the nearby districts of Palghar, Thane, Sindhudurg, Ratnagiri and Raigad – where the storm is expected to make landfall on Wednesday afternoon – had been put on alert and evacuations were underway.

The government has deployed 10 National Disaster Response Force (NDRF) teams for rescue operations during the cyclone in Maharashtra and put six more on standby, while Gujarat has also deployed 11 teams.

According to the India Meteorological Department, at 5.30 pm on Tuesday Nisarga was located around 350 kilometers (220 miles) south-southwest of Mumbai and was expected to make landfall on Wednesday afternoon near Alibaug in the Raigad district as a severe cyclonic storm, with sustained winds of 100-110 kmph (60-70 mph), gusting to 120 kmph.

The IMD warned that very heavy rainfall could lash Mumbai when the cyclone crosses the coastal city, bringing in strong winds equivalent to a category 1 hurricane, along with “rough to very rough” sea conditions.

Fishermen have been told to come back to land due to the possibility of high waves in the range of 2.3 – 6.5 meters (7.5-21 feet) as squally winds are expected to hit the entire coast.

After making landfall, the storm is expected to move towards the southern districts of Gujarat and weaken into a depression by Thursday morning, causing widespread rains in the area.

In a video message, Maharashtra Chief Minister Uddhav Thackeray urged people in the affected areas to stay indoors for the next two days, adding that power may be cut in some regions as a result of heavy rains and flooding.

The chief minister stressed that precautions would be taken during the relief and rehabilitation efforts owing to the high number of Covid-19 cases in the state, especially its capital.

The novel coronavirus has already infected more than 53,000 people and claimed over 1,600 lives in Mumbai, considered India’s financial capital and also its most populous city.

Prime Minister Narendra Modi said he had taken stock of the situation in the wake of cyclone conditions in parts of India’s western coast.

“I urge people to take all possible precautions and safety measures,” he wrote on Twitter.

This is set to be the second cyclone to hit India in less than two weeks, after severe cyclonic storm Amphan killed at least 90 people in eastern India after making landfall on May 20.

Nisarga comes at a moment when India has started easing the world’s largest lockdown of 1.3 billion people, imposed on Mar. 25 to stop the spread of the coronavirus, although the storm could put further pressure on government machinery struggling to contain the disease.

The disease has infected nearly 200,000 people and claimed over 5,600 lives in the country, making it the seventh most affected by the virus, while also causing the entire economy to come to a standstill as a result of the lockdown. EFE-EPA 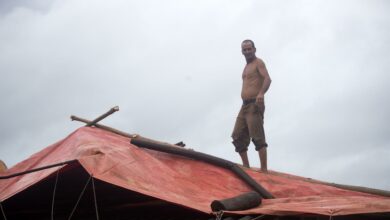 Ian forecast to become hurricane while moving west of Cuba