New Delhi, Apr 28 (EFE).- Several parts of India, especially its northern and northwestern states, on Thursday continued to witness a severe heatwave unusual for this time of the year, with maximum temperatures rising above 40 degrees Celsius in many regions, after the country witnessed record high temperatures in March.

The extreme heat has also led to a spike in the demand for electricity, even as the power sector stares at a crisis due to dwindling stocks of coal, which accounts for around 70 percent of all electricity generated in the country.

According to the India Meteorological Department, New Delhi registered a maximum temperature of 43.5 degrees Celsius on Thursday, the highest in April in 12 years, while the city of Prayagraj, in the northern state of Uttar Pradesh, registered the highest temperature in the county with 45.9 degrees.

There is no respite in sight for the people as the IMD has issued an orange alert, the second most serious weather warning, in the next two days for heatwave conditions in the states of Madhya Pradesh (center), Rajasthan (west) and parts of Maharashtra (southwest), while northwest India is also expected to witness a further rise in temperature.

Experts have warned of unprecedented heat in May and June, the peak months of summer for the region, as India already witnessed its hottest March on record with data going back 122 years, a phenomenon linked to the lack of rains brought by western disturbances during the period.

The surging temperatures led to India recording its highest ever power demand met of 201 GW on Tuesday according to the power ministry, while the coal reserves at many of the country’s 173 thermal power plants are running low.

Domestic coal producers such as state-owned Coal India Limited have been struggling to fulfil the rising demand amid disruptions in local and international supply chains and the lack of railway wagons to transport the required amounts of the fossil fuel. 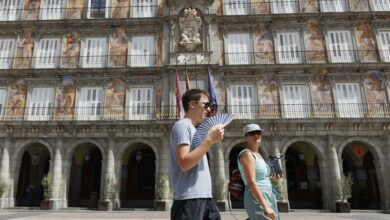