Ranjitsinh Disale, a primary school teacher in the Solapur district of the western state of Maharashtra, immediately announced that he would share the $1 million prize money with the nine other finalists.

Competition judges selected Disale, 32, from over 12,000 nominations and applications from 140 countries around the world, the organizers of the award said in a statement.

Comedian Stephen Fry made the prize-winning announcement in a virtual ceremony broadcast from the Natural History Museum in London.

Disale joined the primary school in 2009 when it was in a dilapidated building, sandwiched between a cattle shed and a storeroom.

Most of the girls were from tribal communities where school attendance could sometimes be as low as 2 percent, and teenage marriage was common.

For those that did make it to school, the curriculum was not in their mother tongue Kannada, leaving many students unable to learn at all.

“Disale was determined to turn this around, moving to the village and going to great efforts to learn the local language,” the organizers said in a statement.

“He not only translated the class textbooks into (their) mother tongue but also embedded them with unique QR codes to give students access to audio poems, video lectures, stories and assignments.”

The organizers said the impact of his interventions had been extraordinary.

“There are now no teenage marriages in the village and 100 percent attendance by girls at the school.”

Disale’s school was also recently awarded the best in the district, with 85 percent of his students achieving A grades in annual exams.

One girl from the village graduated from university, something that was an impossible dream before Disale arrived.

In his winner’s speech, Disale said the Covid-19 pandemic had exposed education and the communities it served in a multitude of ways.

“But in this hard time, teachers are giving their best to make sure every student has access to their birthright of a good education.”

“I am very pleased to announce that I will share 50 percent of the prize money equally among my fellow top 10 finalists to support their incredible work. I believe, together, we can change this world because sharing is growing.”

Sunny Varkey, the founder of the Varkey Foundation that set up the award in 2013, said that “by sharing the prize you teach the world the importance of giving.”

The teacher has also helped his students apply their learning to tackle real-world problems they face in the drought-prone district of Maharashtra.

The intervention helped successfully tackle the issue of desertification, increasing green land from 25 percent to 33 percent in the last ten years.

Varkey Foundation instituted the Global Teacher Prize to recognize one exceptional teacher who has made an outstanding contribution to the profession as well as to shine a spotlight on the role teachers play in society. EFE-EPA 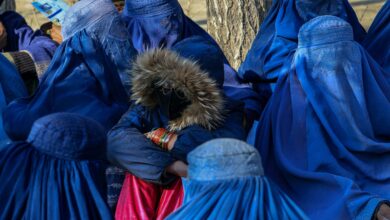