International Desk, May 1 (EFE).- The countries of Latin America commemorated International Labor Day on Saturday with restrictions due to the coronavirus pandemic but with firm claims of a speedy economic recovery.

Since the outbreak of the pandemic in Latin America in March 2020, the region has lowered its gross domestic product to 2010 levels, according to the Economic Commission for Latin America and the Caribbean.

In addition, 57 percent of employment is precarious and poverty has returned to the levels of 15 years ago, according to the secretary general of the Organization of Ibero-American States (OEI) for Education, Science and Culture, Mariano Jabonero, in a recent interview with Efe.

In Venezuela, where workers from different unions demanded with banners “decent salaries” and “vaccines for all,” the government Satuday increased the minimum wage by 177.78 percent and placed it at 10 million bolivars, equivalent to $3.54, according to the official exchange rate.

Bolivia took advantage of Labor Day to launch a package of measures aimed at workers, including several legislative projects and an increase in the basic salary of 2 percent.

In Brazil, amid its Covid-19 crisis, thousands of protesters took to the streets to support or protest against the government. Most of the demonstrations were in favor of President Jair Bolsonaro, one of the most skeptical leaders of the seriousness of the pandemic and now the target of a Parliamentary Investigation Commission.

Colombia again witnessed demonstrations but, unlike the previous three days of protests against the tax reform proposed by the government, they took place calmly and without major incident on May Day in different cities, where better labor conditions were demanded.

Some 200 sex workers marched in Mexico City to demand an end to the violence and extortion that they suffer, as well as to demand their right to work.

In Paraguay, several unions gathered to denounce a historically precarious employment situation now deepened by the pandemic, with the consequence of job losses.

Likewise, in Chile the date was remembered this year with a virtual event due to lockdowns. The claim for emergency rent, the freezing of prices and the increase in the minimum wage were some of the main demands of the meeting, convened by the Central Union of Workers, which was broadcast through social media.

Meanwhile, in Uruguay, in the absence of the massive traditional march, “decentralized activities” were carried out led by the PIT-CNT trade union center and which were focused on collecting signatures against the Urgent Consideration Law, a contentious government proposal, as well as on the donation of food.

Hundreds of Honduran workers marched to demand that the government promote “mass vaccination” against Covid-19 and other measures to mitigate the crises caused by the pandemic.

And in Panama, with the highest unemployment rate in 20 years and in the midst of dialog to reform pensions, unions marched to denounce the “exclusive model that takes away labor and social security rights” from the working class, and called for unity to make the nation “prosperous for all. EFE 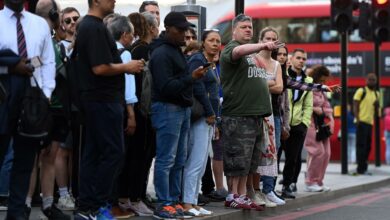