International Desk, Jun 10 (EFE).- In anticipation of the official confirmation of the Peruvian electoral authorities, the Latin American left celebrated Thursday what it already considers a “triumph” for Pedro Castillo in the presidential runoff last weekend over the right-wing candidate Keiko Fujimori.

With just 0.7 percent of the votes still to be counted, Peru’s ONPE electoral agency said Thursday that so far, Castillo has 50.2 percent of the votes (8,803,629), with an advantage of 68,473 votes over Fujimori, who received 49.8 percent. It is now in practice very difficult for the result to be reversed.

One of the first to react was Argentinian leader Alberto Fernández, who congratulated Castillo and referred to him as “president-elect of Peru,” to the annoyance in the Peruvian government.

“Today I contacted @PedroCastilloTe, president-elect of Peru. I expressed my desire that we join forces in favor of Latin America. We are deeply twinned nations. I celebrate that the dear Peruvian people face the future in democracy and institutional solidity,” Fernández wrote on Twitter.

The message upset the government of outgoing president Francisco Sagasti, who sent a note to the Argentinian embassy in Lima.

In it, the Ministry of Foreign Affairs of Peru said that “the final results of the general elections (of) 2021 have not yet been announced by the electoral authorities.”

“Bolivia joins the celebration of the Peruvian people and congratulates brother @PedroCastilloTe, President-elect of # Peru, a country with which we share history and culture,” Arce wrote on Twitter.

Arce highlighted that with Castillo “the #PatriaGrande joins forces to continue the fight for a tomorrow with justice and equality for the peoples,” in a message that was accompanied by a video of Castillo celebrating on a balcony while fans waved multicolored Whipala flags, representing the indigenous peoples of the Andean region.

“All institutions and the international community must respect the result of the sovereign will of the Peruvian people,” said Morales, who has indigenous roots, as does Castillo.

Former Brazilian president Luiz Inacio Lula da Silva joined the chorus of congratulations and said it was an “important victory” for the leftist leader.

“The result of the Peruvian ballot box is symbolic and represents another advance in the popular struggle of our beloved Latin America,” said da Silva.

In turn, the vice president and first lady of Nicaragua, Rosario Murillo, welcomed the results and also called Castillo “president-elect.”

The wife of President Daniel Ortega said that his triumph is “a great victory for the peoples of Latin America… a victory that all people celebrate, because it is a victory that honors us all.” EFE 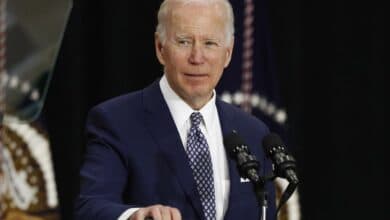