International Desk, Jun 28 (efe-epa). – The coronavirus pandemic forced the worldwide LGTB+ community to cancel in-person marches and Gay Pride parties on the weekend but not to scale back their demands for equality, which they have lobbied for this year online and at assorted smaller demonstrations.

The Internet has been the place where the Global Pride 2020 festival is being celebrated this weekend, among the online events being a concert with artists such as pop icon Elton John performing from their homes, and the “Can’t Cancel Pride” concert at which Ricky Martin and Katy Perry performed, or Pride Inside offering chats and other activities through July 5.

Each country is also holding virtual conferences and discussions regarding the particular demands being made by LGTB+ groups worldwide.

In Belgium, one of the few countries in which the Gay Pride festival is being held in the traditional way – albeit in August – between now and then organizers are preparing the events and discussion influenced by concern over the health crisis caused by the coronavirus pandemic.

The Belgian Pride association, which is coordinating the event along with other LGTB+ groups, said that this year the Belgian Gay Pride festival will be dedicated to “mental and physical health.”

The group said is wants to call attention to th emany challenges that must be faced, such as preventing HIV and giving transgender people access to health services.

In addition, the Belgian organizers said that mental health does not seem to be improving, with several studies showing that LGTBI people have a much higher risk of suffering mental health problems, including suicidal thoughts and attempts.

In The Netherlands, an international group of politicians, artists, journalists and former elite athletes – including British songwriter and performer Elton John and the European commissioner for equality, Helena Dalli – published a letter in several media forums in which they warn that the coronavirus has serious social and economic consequences over the long term, especially for minorities.

In Mexico, the so-called Comite Incluye T organized a virtual event that was rebroadcast on the weekend on YouTube, Facebook and Mexican television’s Canal Once that included information, discussions and assorted artistic expression under the slogan #ElOrgulloPermanece.

The information capsules revolved around four main themes: recognizing trans people from childhood, recognizing the rights of diverse families, equal rights for everyone and preventing, detecting and providing timely health care for HIV and other illnesses and conditions.

In Italy, the demand this year is very specific: an effective law against homophobia.

This week, it is expected that Italy’s Chamber of Deputies will begin examining a bill against homophobia pushed by lawmaker Alessandro Zan, with Italy’s center-left Democratic Party (PD), one of the parties comprising the government coalition.

The aim is to strenthen an existing law that since 1993 punishes with up to four years in prison hate crimes committed due to issues of race, ethnicity, religion or nationality, including discrimination based on sexual orientation, gender identity or misogyny.

The Italian Episcopal Conference has rejected the bill, saying that “a new law is not necessary” and is pushing for “educational commitment to prevent” cases of discrimination and homophobia.

Italy, where the coronavirus has infected more than 240,000 people and killed 34,700, Gay Pride this year has been commemorated with assorted online and in-person events, although that has not included large gatherings due to the social distancing rules in force to limit the spread of the coronavirus.

In London, meanwhile, although the large parade originally scheduled for Global Pride day was cancelled, a group of people gathered for a demonstration that linked the demands of the gay community to the recent protests against racism.

Another march, amid security measures to prevent Covid-19 infection, was staged by a small group of LGTB+ veterans to hail the 50th anniversary of the pioneer organization founded in New York in 1969 that gave rise to the gay liberation movement.

In Barcelona, there was also an historic demonstration, the first in Spain to demand gay rights, with hundreds of people on Saturday moving through the downtown capital of Catalonia to commemorate the first such demonstration 44 years a few months after the death of long-time dictator Francisco Franco.

The rest of the events in Spain, however, were relegated to the Internet, with the central theme of the discussions and forums to be the role of women in LGTB+ activism

Workshops in educational diversity, sexual health or raising LGTB+ awareness in Latin America were also organized in Spain, and people who are suffering serious forms of psychosocial harm amid the Covid-19 pandemic or the quarantines – including loneliness – were not forgotten in those discussions. 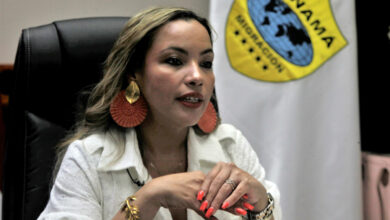 Migrant flow in Darien so far this year almost equals that in 5 mo. in 2022