Los Angeles, Panama, Sep 29 (efe-epa).- Clapping their hands rhythmically and taking a simple step side to side, members of Panama’s Ngabe-Bugle people chant the catchy phrases “bailalele” and “cantalele,” which translate as “Hallelujah” to celebrate another anniversary of their official religion, known as Mama Tatda, a mixture of Catholicism and native elements that “freed” this indigenous tribe 58 years ago.

Surrounded by the jungle of western Panama, almost 100 Ngabe-Bugles wearing their colorful traditional outfits with their characteristic small detailed geometric designs sink to their knees on the damp ground and began praying in the Ngabere language.

They raise their voices above the heavy rain that regularly falls at this time of year, hitting the shaded walkway with its zinc roof held up by wooden beams under which they have taken shelter.

“Guardian angel, Mother Maria, Tatda Dios,” the men and women repeat four times, separated by gender on both sides of the walkway, and they begin to genuflect in a special way with their eyes closed: instead of the four traditional motions making the sign of the Cross, the people of the tribe make six, three over their waist, two at their shoulders and one over their head with their hands folded in prayer.

They pray a minimum of six times per day here in the village of Los Angeles, located in the western province of Chiriqui on the border with Costa Rica, and each Sept. 22 the Ngabe-Bugle celebrate the anniversary of the arrival of Mama Tatda, which translates as “mother father” or “Virgin Mary-Jesus Christ.”

This 58th anniversary of Mama Tatda has been marked by two unexpected elements: certain violent events linked to sects that caused the deaths of at least eight tribespeople, almost all of them women and children, in alleged exorcist rites, as well as the Covid-19 pandemic, which has hit this poverty-stricken region lacking all types of infrastructure very hard.

The Mama Tatda church has denied any link with the supposed sects and their “practices which are not religious but rather are unnatural,” the president of the Ngabe-Bugle Congress, Raimundo Palacio, told EFE.

The followers of Mama Tatda acknowledged to EFE that what happened to their murdered tribespeople saddens and pains them, such as the case of five children who were held captive by self-described “messiahs” who abused them, but they emphasized that there is no “witchcraft” in their version of Mama Tatda and that, on the contrary, the religion only preaches “peace and love.”

The Panamanian Attorney General’s Office is investigating three sects detected in the Ngabe Bugle district, one of the five such districts in Panama, which are autonomous territories hard to access and mired in poverty and ignorance, according to native leaders.

Ten members of one of those sects, the so-called “New Light of God” sect,” were charged in January with the murder of a 33-year-old pregnant woman, her five minor children and a teen, whose bodies were found inside a mass grave in an isolated part of the district.

At least five other people, allegedly members of another sect, were arrested in August and September for having kidnapped five children, who have now been rescued, while three of them were also charged with the death of a person whose buried remains were found in the area.

The feeling of terror that permeates some zones of this area because of the sects comes in addition to fears of the pandemic. The Ngabe-Bugle district is said to be the hardest-hit area, with 1,020 out of the 1,800 confirmed cases in all Panama’s indigenous territories up through the beginning of August, according to the latest available official figures.

The Mama Tatda church is the official religion of the Ngabe-Bugle district, the largest in Panama, and since 1999 it has been included in its “constitution.”

The “church,” as its faithful call it, is syncretist – that is, an amalgam of assorted belief systems – and Amerindian, combining Catholicism with indigenous animist elements, preaching “the word of Jesus” in the local language and featuring native dances, songs and chants, and including facial painting and respect for nature.

Almost half of the roughly 250,000 million residents of the district belong to Mama Tatda – according to what indigenous authorities told EFE – and the religion prohibits the “balseria” (festival of strength among men), the “chicha fuerte” (consumption of alcohol) and polygamy and promotes equality between men and women as a central cultural pillar.

The story goes that Mama Tatda appeared to Delia Bejerano de Atencio – her indigenous name was Besiko Kruningrobu – in 1962 to “free” the local people from the “colonists” and lead them “along the road of faith and good practices.”

Besiko died after coming down with a fever in 1964 at age 23, leaving as an orphan a 2-year-old daughter – Emilce Atencio – who now heads the church and lives in a community deep in the jungle.

Clementina Perez, one of the religious leaders, told EFE with a firm gaze and her face adorned with traditional black and red painting, that the Ngabe-Bugle were a “humble and slaughtered people until Mama Tatda came down and said that he was going to free us and asked us to carry out his instructions so that the world could continue.”

The ongoing struggle is a key part of Perez’s makeup, and in 2015 she took to the streets to fight against the construction of a hydroelectric plant in an area contiguous to the tribal district, where the local residents have a camp, which she heads, on the banks of the Tabasara River, where on a rock wall there is a pre-Colombian petroglyph that is considered sacred to Mama Tatda and that was “totally flooded” after the dam was built and the reservoir was filled. 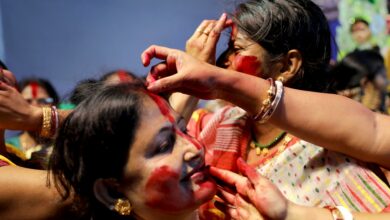 India celebrates Dussehra with gusto after 2 years of Covid restrictions

Memphis Hispanic Pastor in the Heat of Controversy