Medvedev, who is known much more for his hard-court prowess than his excellence on clay, looked at home at Roland Garros for the second straight match.

Employing his well-honed counterpunching skills, the 26-year-old Russian won almost exactly half of his Serbian opponent’s serve points throughout the contest and notched a whopping seven service breaks.

Although his own service numbers were slightly less impressive, the 2021 US Open champion still struck seven aces and was only broken once each set.

Despite the straight-set win, the world No. 2 was humble about his performance.

“Today, honestly I think Laslo was playing better clay-court tennis but I managed to fight, to put one more ball in the court than him. It was a very tough match … but I’m happy to win.”

The challenge figures to get tougher for Medvedev in the round of 32 on Saturday, when he will square off against talented 22-year-old Serbian Miomir Kecmanovic, who downed Kazakhstan’s Alexander Bublik 4-6, 7-5, 6-2, 6-1.

In other men’s action, Tsitisipas had a surprisingly tough battle against a little-known Czech opponent who is ranked No. 134 and at age 25 was playing in his first Grand Slam tournament.

Although the Greek world No. 4 was solid on serve, finishing the match with 25 aces and only having his serve broken on two occasions, he struggled more than expected in his return games.

After a solid first set, Tsitsipas only managed to register two more service breaks the rest of the contest and converted just three of his 12 break-point chances overall.

He narrowly avoided a fifth set, saving three set points in the second set and rallying from a 6-2 deficit in the fourth-set tiebreaker before clinching the victory with a potent forehand that forced an error.

“He drove me crazy,” Tsitsipas said afterward. “It was really frustrating. He was putting every part of his body behind the ball. It was an incredible effort.”

Tsitsipas will continue his quest for a maiden Grand Slam title when he squares off on Saturday against Sweden’s Mikael Ymer, who defeated Great Britain’s Daniel Evans 6-3, 3-6, 6-2, 6-3 on Thursday. 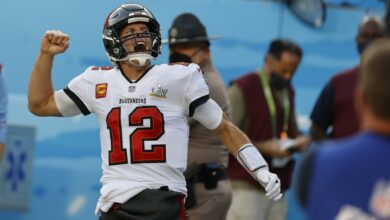