Berlin/Paris, May 31 (EFE).- German Chancellor Angela Merkel and French President Emmanuel Macron congratulated each other on Monday over the European Union’s recent ability to react, but they warned of the risk of the bloc being left behind economically by the US and China.

The two leaders, who appeared after a bilateral ministerial meeting, noted the recent achievements of the EU in terms of recovering from the Covid pandemic as well as the recent sanctions imposed on Belarus and the FCAS defense project, in which Spain is also involved.

The French president, however, urged that the bloc remain alert to see if new decisions will be needed to get the EU out of the coronavirus crisis, which depend on both the internal evolution of the EU as well as international dynamics.

“The coming months will tell us if we need greater ambition in our big policies,” Macron responded when asked about whether a new economic reactivation program would be necessary above and beyond the 1.8 trillion euros ($2.2 trillion) contemplated in addition to the EU budget for 2021-2028 and the post-Covid recovery plan.

In the French leader’s opinion, it is vital to continue “having both a pragmatic outlook and the geopolitical will” and to avoid allowing “any type of lagging in the EU vis-a-vis the United States and China” to occur.

He insisted that both France and Germany will do “what is necessary” so that on the technological level, as well as in innovation and training of human capital, the EU “will be able to decide for itself and to build its future just like others.”

Thus, the joint declaration released by Paris and Berlin urges that the implementation of reconstruction plans be undertaken “rapidly and successfully” to “accelerate the economic and social recovery … (and) to prepare the EU for the digital and ecological transformation.”

He also called for broad support for investment and innovation in “strategic sectors,” mobilizing the “financial instruments of the EU,” if necessary.

Macron also urged the other countries in the bloc to “invest massively in green and digital technologies” to protect their economic interests and to take advantage of possibilities for cooperation in the so-called Important Projects of Common European Interest (IPCEI) in industrial policy, hydrogen technology and microelectronics.

The key to community success, in the opinion of both leaders, is in the effective functioning of the French-German axis. “Europe cannot move forward if France and Germany are not in agreement. Having them in agreement is not enough, but if there’s no Franco-German agreement there’s no agreement (among the) 27″ EU members,” said Macron, referring to the plan that, for the first time, would allow the European Commission to finance itself via issuing joint debt.

“I believe that in these (past few) years we’ve managed to move Europe forward on a forced march,” Macron added in reviewing the past four years that he and Merkel have headed the bloc and taking into account the fact that the chancellor will leave active politics after the Sept. 26 elections in Germany.

Merkel, meanwhile, said that recently “important decision have had to be made every day,” noting the upcoming G7 and NATO summits and emphasizing the “culture of dialogue” that has been established between Berlin and Paris in recent years to coordinate their efforts and find positions where there is a common consensus.

The two leaders also emphasized the community’s ability to act in response to Belarus’s forcing down of a commercial flight so that it could arrest opposition journalist Roman Protasevich, a move that has led to a new round of unanimously approved and urgently implemented sanctions by the 27.

Merkel said that the measures were “correct” and “necessary” after the “regrettable” action of Belarusian President Alexandr Lukashenko ordering that the plane be forced to land in Minsk.

Finally, the two leaders noted the advances made in the effort to create a full future air defense system, a long-term initiative costing billions and in the industrial development of which Spain is also taking an active role. 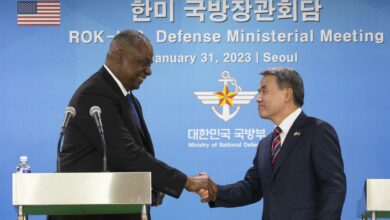