Soi burst onto the Kenyan cultural scene in the late 1990s as an innovative artist of the second generation of creatives of the Kuona Trust, a centre of contemporary visual arts dedicated to promoting emerging talent.

Soi, 47, has become a cult figure in East Africa and made a name for himself on the international scene with shows in Japan, the United States and Europe.

“The market follows me. But I am not influenced by the market”, he tells Efe in his study, a green and yellow glass house that stands in the shade of two trees in a walled area in Kilimani, a wealthy Nairobi neighbourhood.

His studio is an explosion of colour with canvasses, pots of acrylic paint and brushes scattered about amid the odd bottle of bourbon which Soi calls his “creative juice” and boxes of cigars.

“My influence comes from this city. I am very influenced by Nairobi, the things that people do in Nairobi. I am basically telling stories about this city.”

His style is unmistakable and offers a complex and critical dialogue dominated by bright colours and thick black lines all seasoned with lashings of subliminal social critique.

“Soi, dressed in a grey t-shirt and shorts, puts the finishing touches to a painting about the “economy of love”.

The canvas features a bearded white man lying next to a half-naked young black woman puffing on a cigarette.

The work addresses a recurring theme of his.

“I am interested in commercial sex work, due to the fact that there is a lot of ignorance in this city that exists when it comes to issues that revolve around the trade.

“It is me trying to tell the story of the African man and how he perceives women. Women as objects of pleasure, women as entertainment gadgets,” the artist explains.

Soi’s female nudes have been met with controversy in Kenya, a conservative and religious society, and earnt him the label of creating “immoral” and “pornographic” work.

The National Museum of Kenya has even vetoed exhibitions of his back catalogue.

“I am not controversial at all. I am basically documenting society. So you know the controversial bit here is not in me, it is in society itself,” the artist says.

Political corruption has not escaped his sharp eye either.

According to Soi, African politicians have enabled China to become the continent’s ubiquitous investor.

In a series called China loves Africa, Chinese President Xi Jinping is depicted as Jesus Christ hugging a briefcase bursting with dollar bills as a cohort of African disciples in underpants bow to him. 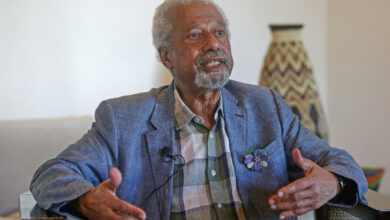 Gurnah: Writers on Africa must grapple with consequences of colonialism