Lima, Feb 16 (efe-epa).- Tension on the Peru-Brazil border boiled over Tuesday with incidents between the Peruvian authorities and a migrant caravan that tried to cross the checkpoint from Brazil.

According to witnesses in the Peruvian jungle region of Madre de Dios, a group of about 350 migrants breached the border crossing between the towns of Assis, Brazil, and Iñapari, Peru, in order to continue with their plan to cross the Andean country and march north.

Among incidents that resulted in police charging, tear gas and scuffles, the Peruvian police returned a large number of the migrants, mostly Haitians, but also citizens of African countries such as Sierra Leone, Senegal and Ivory Coast.

Another group stayed in the municipal stadium of Iñapari, mostly women – several of them pregnant – and small children, waiting for their situation to be resolved.

According to César González, a lay missionary and Spanish journalist who lives in the area, the tension soared early in the morning Tuesday after a night of torrential rain that hit the caravan’s camps on the Brazilian side of the border.

The large group approached the border bridge and managed to cross, which triggered the reaction of the authorities with episodes of violence that also affected women and children.

The caravan divided into two groups and one, the majority men, was taken back to Brazil and remains in the border area.

Another remains in Peru, although little by little the migrants are also being returned to their point of origin.

“One of the problems now is that several of the men who have returned have their wives and children on the other side of the border and are demanding to be reunited with them. They are also afraid of leaving their wives, who are in the stadium, alone and that they make them return but without the money they carry. I understand that it is their experience when crossing borders – that they are abused and robbed,” González said.

Fabio Pontes, a Brazilian journalist who works in the area, told EFE that the situation is “very tough” and that it escalated after “a night of heavy rain in which they had no shelter or safe human conditions.”

“They are all amassed in the midst of the pandemic due to Covid-19. It is a complicated situation for these people, who mostly worked in southern Brazil but the crisis of the pandemic has forced them to go out and look for other destinations. They do not want to go to Peru – they want to cross to reach Mexico, the United States, Canada or return home,” he added.

The day of tension shows the need for a “political” solution to this situation, as Father Paco, a priest with 50 years of missionary experience in Brazil, told EFE, adding that what is happening on the border is “very, very sad.”

“Here they are now waiting for a solution, which has to be political and governmental, since the border is officially closed due to Covid-19 and that is why they are not allowed to pass, at least officially,” he told EFE.

The missionary pointed out that the negotiations are expected “to be quick,” since the people “can no longer hold out and are very nervous.”

“The urgent thing now is to push the authorities to create a humanitarian corridor. They only want to cross Peru. And now we hear that there are more people who come to this crossing, people who are looking for a better life, to return to their country, and it is terrible. And it is also terrible how they are treated. For example, fuel trucks cross the closed border, but people do not,” he said.

That request was also made by the Apostolic Vicariate of Puerto Maldonado, who warned of an imminent serious “social conflict” due to this crisis.

According to a statement issued by the vicariate, the migrants report that their intention is only for Peru to let them cross the border in order to continue their journey, and they say that if the authorities enabled a mode of transport, they would pay for that service.

“We urge the regional and national government authorities, and especially the Chancellery of the Republic to find a formula that allows it to respond immediately to this emergency, avoiding a serious social conflict that adds to the serious problems that we already have,” urged the religious organization.

On Monday, the mayor’s office of Assis told EFE that the governor of Acre, Gladson Cameli, contacted the Brazilian Ministry of Foreign Affairs to “manage a request of a humanitarian nature, through diplomatic channels” that authorizes the entry of the migrants into Peruvian territory. EFE-EPA 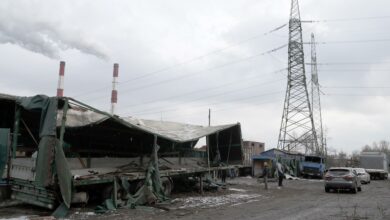