The latest recoveries bring the confirmed death toll from the June 24 disaster to 24, while 124 people remain unaccounted for and 188 others thought to have been in the building at the time of collapse are known to be alive and well.

During a news conference at the site of Champlain Towers South in Surfside, the mayor also said that the county government decided to proceed with the controlled demolition of the still-standing portion of the structure before Tropical Storm Elsa brings high winds to the area early next week.

“Engineers are on-site and they’re still conducting their due diligence, so we don’t have an exact time frame at this time,” she said.

Hours earlier, the mayor of Surfside said he had the impression that the demolition could take place “as early as” Sunday.

“The fear was that the hurricane may take down the building for us, and take it down in the wrong direction, on top of the pile where we have victims” Charles Burkett said in comments that came before Elsa was downgraded to a tropical storm.

Demolition of the building “will allow our rescue workers to pour all over the entire site without fear of any danger from falling debris or falling buildings,” he said.

Elsa, located Saturday just south of the island of Hispaniola, shared by the Dominican Republic and Haiti, is expected to move west across Cuba before making a northward turn into the Gulf of Mexico.

On the projected path, the storm would not make a direct impact on the Miami area.

Florida Gov. Ron DeSantis endorsed the county’s decision in favor of prompt demolition, calling it “the prudent thing to do,” and said that the state government would cover the cost.

“If the building is taken down, this will protect our search and rescue teams because we don’t know when it could fall over, and of course, with these gusts, potentially, that would create a really severe hazard,” he said.

Rescuers have been working around the clock since the collapse except for a period of 15 hours at midweek when activity was suspended due to fears that the surviving section of the 40-year-old building might collapse.

Already searched areas of the debris mound will be covered ahead of the demolition, Miami-Dade County Fire Chief Alan Cominsky said.

Levine Cave expressed appreciation Saturday for the initiative taken by officials in Miami-Dade County’s individual municipalities to carry out inspections of other high-rise buildings built 40 or more years ago.

On Friday, authorities in North Miami Beach, near Surfside, ordered residents to evacuate a 156-unit building constructed in 1972.

Crestview Towers had been declared unsafe based on structural and electrical issues, the city government said. EFE

At least 26 dead in forest fires in Algeria 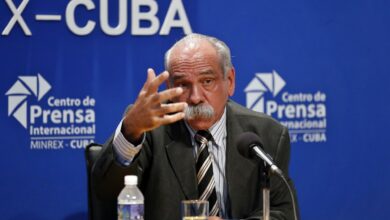