Guano, Ecuador, Aug 5 (EFE).- The mystery of the Guano mummy, a naturally mummified body discovered here 73 years ago has deepened in the wake of a scientific analysis indicating that the remains are not those of a 16th-century Spanish friar on a mission to evangelize the indigenous people of present-day central Ecuador.

Measuring 156 cm (61.4 in) and encased in a jar, the body was found following the earthquake that rocked Guano on Aug. 5, 1949, which caused one of the walls of the colonial-era church to collapse.

It was long thought that the mummy corresponded to Fray Lazaro de Santofimia, a guardian of the Church of the Assumption and the adjoining Franciscan monastery.

The accepted account held that Fray Lazaro was buried in the walls of the church after dying of natural causes, the director of research for Ecuador’s National Institute of Cultural Heritage (INPC), Maria Ordoñez, told Efe.

Three years ago, Ordoñez and French scientist Philippe Charlier started a new study of the mummy building on earlier efforts by the team from National Geographic who took X-rays of the body and by researchers at Quito’s San Francisco University, where the remains underwent a CT scan.

The latest analysis has identified the cause of death as rheumatoid polyarthritis, an autoimmune disease common in the Americas but rare in Europe and Asia prior to the European conquest of the New World.

In the case of the mummy, the disease appears to have arisen from an abscess in the jaw.

Carbon-14 dating shows that the remains are from the period between 1735 and 1802 and according to Ordoñez, who earned a doctorate in archaeology at Leiden University in the Netherlands, the clothing points to an origin later than the 16th century.

Some of the garments were machine-made in a “period when a textile industry was already starting,” she said.

Moreover, the DNA extracted from the remains indicates that the subject was of mixed European and indigenous heritage, which makes it “most probable” the remains are not those of Fray Lazaro, she said.

Though the man’s identity remains a question mark, the dating of the remains has allowed scientists to rule out the possibility that the body represented the missing link in the spread of rheumatoid polyarthritis to Europe, Ordoñez told Efe. EFE sm/dr

To the moon: South Korea’s first lunar probe headed to its destination

Space debris that fell into Australian mountains belongs to SpaceX 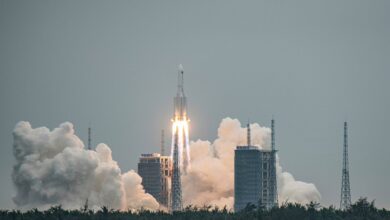