Moscow, Jan 16 (efe-epa).- Russian opposition leader Alexei Navalny is packing his bags in Germany before a risky return to Russia this weekend amid concerns over his safety in his home country.

His actions will, however, solidify his stature as Vladimir Putin’s most tenacious opponent.

“It is a heroic act,” Sergey Parkhomenko, a journalist and analyst, said on the Echo of Moscow radio station, adding that Navalny’s return was a “colossal risk.”

Navalny, who has directly implicated Putin in the Novichok poisoning that almost took his life in August last year, could be detained as soon as he lands in Russia, where there is a warrant for his arrest.

According to Russia’s penitentiary service, the warrant was issued in December last year, although it was only made public after Navalny announced his plan to return to Russia following five months of medical treatment in Germany, where he was medically evacuated after the poisoning.

The Kremlin has kept its silence on the matter since Navalny announced his return last Wednesday in line with its policy of trying to ignore Navalny altogether. When asked about the opposition figure, the Kremlin’s spokesman uses terms such as “the person of which you talk” or the “Berlin patient”.

Navalny is due to arrive at Moscow Vnukovo international airport on Sunday evening on a flight from Berlin.

The Moscow airport’s press office said in a statement that it would not allow press gatherings due to the pandemic.

Moscow’s prosecutor’s office has formally warned at least 15 people who had called for an unauthorized public gathering to greet Navalny off the flight.

Lyubov Sobol, a lawyer with Navalny’s anti-corruption foundation, warned that Russian authorities would go to any length to prevent supporters from meeting the opposition leader at the airport, including re-routing the plane or cancelling the flight altogether. 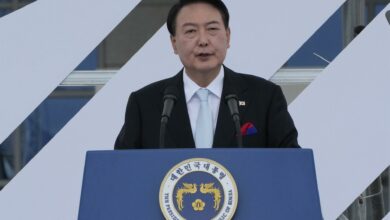