Nawaf, 83, was named the new emir on Tuesday shortly after Sabah died at the age of 91 in the United States, where he had been hospitalized.

“I swear by Almighty Allah to respect the constitution and the laws of the state, to defend the liberties, interests and property of the people and to safeguard the independence and territorial integrity of the country,” the new emir said as he took the oath before parliament.

Nawaf mourned his predecessor during his speech and highlighted the achievements of the late emir in the oil-rich country.

“Today, our nation is facing acute circumstances and critical challenges, which can only be overcome and avoid their consequences by being united, as well as with collaboration of faithful efforts for the best interests of Kuwait and its faithful people,” Nawaf added.

Among the challenges facing Kuwait are being in a region with a growing rivalry between Saudi Arabia and Iran, the years-long standoff between Qatar and a Saudi-led bloc, and the plunge in oil prices, the main source of income in Kuwait.

Nawaf had served as crown prince since 2006, shortly after Sabah was named leader.

Before that, Nawaf held several ministerial positions, including interior, defense and social affairs.

The royal court announced on 23 July that the crown prince was assuming some of Sabah’s powers temporarily after the latter was hospitalized.

The cabinet declared 40 days of national mourning on Tuesday and ordered the closure of institutions for three days. 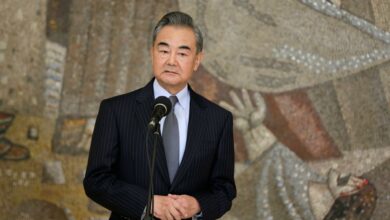