Hundreds of climbers set tents annually at the base camp, particularly during the climbing season in spring.

A government panel has recommended the shift because the thinning glacier makes it dangerous for climbers.

“It is an initial discussion,” Surya Prasad Upadhyaya, director at the Department of Tourism, told EFE.

“We have experienced growing changes in the environment. The Khumbu glacier is rapidly melting,” said Upadhyaya.

“But no official decision on moving the base camp has been taken yet,” said the official.

Khim Lal Gautam, another team member, told EFE that they submitted a preliminary report to the department informing about the environmental changes and suggesting moving the base camp to another place.

“We can avoid the human activities in the base camp that are affecting the Khumbu glacier.”

Gautam, a government surveyor, who was also a member of the Everest height measurement team in December 2020, said climate change was altering the landscape of the Everest region.

Over 2,000 people assemble at the base camp each year and set up tents waiting for the good weather window to climb the tallest peak.

Besides, there are around 57,000 trekkers reaching the base camp annually.

However, Kami Rita Sherpa, who holds a record 26th climb on Everest, said shifting the base camp “is a rubbish idea.”

“Do you think shifting the base camp 300 to 400 meters in the lower area will protect the environment or stop the glacier melting? Not at all,” the climber told EFE.

Kami Rita said shifting the base camp meant increasing climbing hours that could be “potentially dangerous for the climbers.”

Concerns have been growing over the human pollution on Everest.

There are five camps on Everest, including the base camp.

All these camps have tents but do not have toilets.

Guterres urges world to ‘turn the tide’ amid ocean emergency 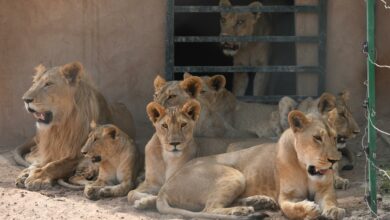 Sudan’s rescued lions roaring back to life in nature reserve