New York, Sep 3 (efe-epa).- The New York Times CEO warned on Thursday that time is running out for media that have not gone digital.

Mark Thompson, who will leave his post at the United States newspaper next week to be replaced by Meredith Kopit Levien, said in an interview with Efe that the key to success lies in quality journalism and strong digital presentation.

Thompson, who has headed the paper since 2012 and oversaw its digitalization, spoke of the difficulty of striking a balance in introducing the necessary changes at the right pace.

In the second quarter of this year, digital revenue exceeded print for the first time, $185.5 million compared to $175.4 million.

In an online interview from an empty newsroom, Thompson spoke about his achievements, failures and his plans for after he leaves the publication.

Question: What has been the formula you have applied to achieve the profound transformation of the New York Times?

Answer: I believe that there’s a real market for quality journalism that when you’ve got really good journalism, well laid out, well packaged and digital products that there is, maybe not everyone, but there are millions of people who need that, want it, and are prepared to pay for it. So we invested in journalism, we invested a lot in software engineers and digital designers and all the rest of it to try and package that journalism in a very effective way. And we got better at selling subscriptions but the core of it to me actually is a belief in journalism.

Q: Was it easy to achieve a change of mentality in a traditional medium like the New York Times?

A: Unfortunately in the newspaper industry traditionally owners and publishers they’re used to the ups and downs in the advertising market. And when there was an up they made big profits and they hired more journalists and when there was a downturn they trim their newsroom and they trim their costs so they could survive, hopefully the market returns again. And I think that’s, frankly, probably a sensible way of dealing with a cyclical advertising market. This is different – this is a fundamental change, it’s like horse and cart to motorcar and you have to invest.

Q: Do you think what has worked in the New York Times can work in other media?

A: The clock is ticking in every newspaper in the world, every single newspaper in the world that clock is ticking. And most of them don’t have as much money in the bank as we’ve got, they haven’t got as big audience potential as we’ve got, they may not have the brand strength that we’ve got. So I do think when I talk to people about this I do think it’s kind of later than you think, we’re 25 years into this revolution and if you haven’t got a radical plan you better come up with one pretty quickly. EFE-EPA 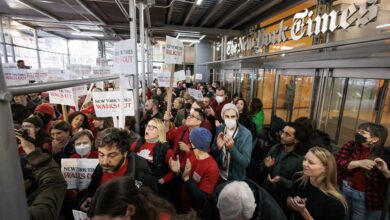