The magnitude-6.3 tremor on the edge of the country’s second-largest city struck at a depth of just 5 kilometers on Feb. 22, 2011 at 12.51 pm during a weekday when many people were working downtown.

The quake, as well as resulting problems such as aftershocks and liquefaction, flattened and destroyed many of the businesses and homes of the city, which is still in the process of reconstruction.

Marking the exact time the earthquake struck a decade ago, a minute’s silence was held at 12.51 pm at a memorial event in the city, before the names of all those who lost their life were read out by first responders and members of the community.

“Today we not only mark the loss of 185 lives, but we remember and we celebrate these people. The joy they gave, the memories made, the lives they lived,” Prime Minister Jacinda Ardern said at the service where hundreds gathered by the Avon River, opposite the Oi Manawa national memorial wall that displays the names of those who died.

“Ten years sounds like a long time, but for many it will feel like just yesterday that Christchurch, this region, and indeed New Zealand was rocked by the events of February 22nd,” she added.

“The toll could not have been more significant in daily reminders made it harder – a fractured landscape, aftershocks, struggling friends and neighbors and children with deep and unseen scars. Ten years on there will be people living their daily lives with the long shadow of that day.”

She acknowledged the survivors, the emergency services, the city’s authorities, and the children who grew up in a broken city after an event “which by rights should not occur in anyone’s lifetime” and not only impacted those in Christchurch, but the whole country who “felt so keenly the enormity of what had happened.”

“It’s the Kiwi way to be stoic, and sometimes the pressure to ‘be okay’ or to have ‘moved on’ with the passage of time can feel very pronounced.”

As flags of other nations flew above the stage, she also made special mention of the 87 foreigners from more than 16 countries who were killed, including 28 from Japan.

“Our flags fly at half mast for them today too,” Ardern said, acknowledging that many of their families could not attend due to border restrictions.

“You displayed great fortitude in the face of sudden, overwhelming loss,” the queen wrote. “My prayers are with all those marking today’s solemn anniversary.”

Wreaths were placed at the wall, and flowers were thrown into the Avon River. Smaller memorial sites and events were held around the city.

“It’s been a hugely difficult decade for this city – at times I’m sure it’s felt impossible,” Ardern said.

“But as we look ahead to the coming decade, I see hope and energy and optimism, and I see Christchurch taking its rightful place amongst New Zealand’s best and brightest cities.” EFE-EPA 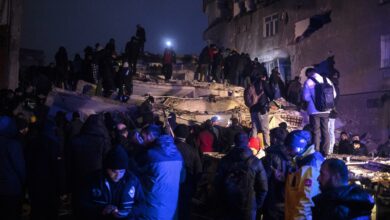 More than 1,400 killed after huge earthquake in Turkey, Syria

Death toll rises to more than 600 in Turkey, Syria after powerful earthquake

More than 500 killed in Turkey, Syria after powerful earthquake

More than 300 killed in Turkey, Syria after powerful earthquake