Seoul, Jan 26 (EFE).- North Korea is preparing a military parade for Feb.8 on the 75th anniversary of its army, experts say, amid a lockdown in the capital Pyongyang to curb a spike in COVID-19 infections.

The daily Rodong said the regime has locked down Pyongyang to strengthen the quarantine measures and prevent any contagious virus from entering the capital.

The newspaper Thursday said the administration was plugging loopholes that could hamper the antivirus work.

It called on the people to maintain “the utmost sense of vigilance” against the virus.

On Wednesday, the Seoul-based NK News reported that North Korean authorities have ordered a five-day-long lockdown due to the rising cases of an unspecified respiratory illness.

The order urged city residents to stay in their houses until Sunday and submit to temperature checks several times a day.

The specialized news portal claimed that it had accessed the North Korean government order.

It is unknown if other regions have been locked down.

A similar lockdown was enforced in May of 2022 when the regime acknowledged the spread of Covid-19 in North Korea.

In August 2022, North Korea announced that it had completely eradicated the virus from its territory.

However, many experts doubted the claim due to the condition of the impoverished and isolated nation’s health system and the lack of vaccines and testing, among other factors.

The regime claimed that during this period about 4.7 million people, accounting for 20 percent of the population, had reported fever and over 20 people had died.

These figures were not in sync with the trajectory of Covid in other countries, leading specialists to believe that a good part of the cases suspected to be Covid could have been those of typhoid fever.

Pyongyang’s lockdown comes as experts point to preparations for a military parade that could take place on February 8.

Satellite images captured last month show formations of soldiers making up the number 75 during drills at training facilities in Pyongyang.

The figure could refer to the North Korean army’s anniversary of that date, NK News reported.

A civilian march can also be seen in a “2.8” formation in Kim Il-sung Square in the capital, possibly referring to Feb.8.

The military parade could showcase missiles and other weapons of the hermetic regime led by Kim Jong-un.

Pyongyang celebrated the 70th anniversary of the creation of the Korean People’s Army in 2018 with a military parade. 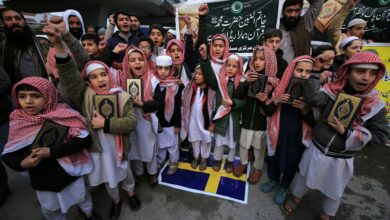