Tokyo, May 15 (EFE).- Japan marked on Sunday 50 years since the end of the United States’ occupation of the Okinawa archipelago for nearly two decades after the devastating World War II.

Some 3,600 people attended the event near the US Marine Corps Air Station Futenma in the middle of a residential area in Ginowan on the island prefecture of southwestern Japan.

The base is a frequent source of protests against the military presence in the prefecture.

Demonstrations have been taking place every year around May 15 since 1978.

“Even 50 years later, the people of Okinawa are still forced to bear an undue burden in hosting US bases,” Okinawa Governor Denny Tamaki said in his speech at the commemoration ceremony.

Okinawa, which represents around 0.6 percent of Japan’s territory, is home to 70.3 percent of the military installations the US has in Japan.

The group of islands, a highly strategic enclave geographically closer to Taiwan than Tokyo, was returned to Japan in 1972 after the US left the country and returned political and economic sovereignty to Tokyo.

At that time, the local population, witness to one of the bloodiest battles in the world war, hoped that the territory would be free of military bases.

“The objective has not yet been achieved,” said Tamaki.

The governor asked the central government to publicize the local situation at the national level, given the lack of knowledge.

He demanded the return of the territory to the local administration to develop its potential and sustain a peaceful environment as “the bridge to all nations.”

Japanese Prime Minister Fumio Kishida, speaking at the ceremony during his first visit to Okinawa since taking office last October, pledged to make “constant visible progress” in reducing the US military presence in the Okinawan archipelago.

“We are working toward reorganizing, integrating, and reducing” the scale of military presence in Okinawa, he said.

The prime minister said his government and the US would soon reach an agreement so that a part of Camp Foster, currently used by the Marines, would be used as a park before its return.

Kishida acknowledged Okinawa’s “great burden” and said he would do his best to address the issue while maintaining the deterrent power provided by the Tokyo-Washington alliance.

The Battle of Okinawa was the only ground invasion of the Japanese mainland by the US during World War II.

It took place months before Japan surrendered following the atomic bombings of Hiroshima and Nagasaki.

The bloody battle lasted three months and killed one out of four Okinawans, around 94,000.

Okinawan authorities usually use the anniversary to underscore the military burden of the archipelago.

They took the case to several courts to overturn the military project as it posed a threat to the environment and could be detrimental to residents. 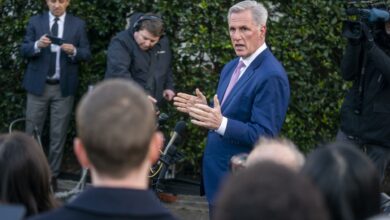