Tokyo, Dec 1 (efe-epa).- The Olympic rings monument returned to Tokyo Bay on Tuesday, after being temporarily removed for safety and maintenance checks in August.

The interlocking rings monument, which stands some 15 meters tall and 33 meters wide, has been repainted and reinstalled in the waters of the Odaiba Marine Park, where they will be exhibited and illuminated every night until the Olympics finish next August, the Tokyo metropolitan government said.

The rings were originally installed in January, but were removed in August after the Games were postponed.

The monument was shipped back to the factory in Yokohama, south of Tokyo, where they underwent a series of overhauls and maintenance.

Tokyo metropolitan government initially planned to establish other Olympic-themed structures in places such as the city’s Yoyogi Park or the top of Mount Takao, in the west of the capital, but has postponed initiatives due to the COVID-19 pandemic.

After being postponed until the summer of 2021 due to the pandemic, the Olympic Games, which will retain the Tokyo 2020 name, will be held from July 23 to Aug. 8, 2021, while the Paralympic Games will take place between Aug. 24 and Sep. 5. EFE-EPA 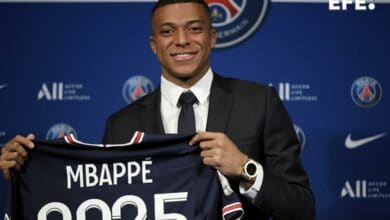 Real Madrid’s Rodrygo: I looked at the badge and thought, we can do it again