Jakarta, Aug 19 (efe-epa).- Two orangutans were rescued on the Indonesian island of Java after being captured by poachers and spending years malnourished in small cages, the NGO International Animal Rescue (IAR) reported.

Orangutans are listed by the World Wildlife Fund as a critically endangered species,

In a statement, IAR said that the two males, estimated to be 20 years old and named Samson and Boboy, were saved last week from a tourist park and a private home and will be sent to the island of Borneo for rehabilitation.

Temia, a veterinarian at IAR Indonesia, indicated that both orangutans showed symptoms of malnutrition, which had resulted in stunted growth and susceptibility to disease, so they are undergoing veterinary examinations.

“They will spend two months in quarantine (…) Based on our observations, their needs as protected animals were not met,” said the activist, who goes by one name.

The orangutans will be taken to the NGO’s rehabilitation center in Ketapang, West Borneo province, in the hope that they can be returned to the wild.

“The rehabilitation process for rescued orangutans is long and complicated. It will be extremely difficult for an orangutan that has been locked in a cage all its life to learn how to survive in the wild,” said Karmele Llano Sánchez, program director at IAR Indonesia.

If the animals have any disease or disability due to poor care over years in captivity, they will not be able to be released, Sánchez added, although she was optimistic that they will now be able to lead a better life.

The existence of the two illegally exploited orangutans was discovered in October last year and their rescue involved the participation of various Indonesian government agencies and IAR activists.

The Indonesian government estimates that 71,640 orangutans live on the islands of Sumatra and Borneo – the latter which Indonesia shares with Malaysia and Brunei – although the population is in decline, according to a government study published in 2017.

The main threat to orangutans is deforestation, mainly in Borneo, due to palm oil plantations and, to a lesser extent, the paper and mining industry. EFE-EPA 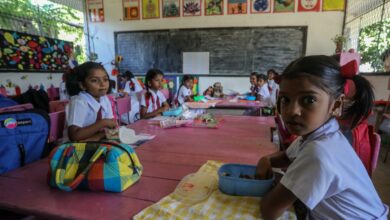