Rome, Nov 5 (EFE).- More than 1,100 migrants are waiting to disembark from two NGO-run rescue vessels in the Mediterranean Sea, the organizations said on social media Friday.

Gordon Isler, managing director of the German NGO Sea Eye, said on Twitter that 800 people were aboard the Sea Eye 4 rescue vessel, which is 53 meters long and 11 meters wide.

“Most of the survivors on our ship were rescued in the Maltese SAR (Search and Rescue) Zone. It would have been Malta’s duty to send and coordinate help. It is a crime that Malta ignores distress calls and it is shameful that other EU countries do not condemn them for it,” he added.

He said the boat was now in the Italian SAR awaiting coordination from that country’s coastguard to disembark the survivors, most of whom were rescued in the last 48 hours.

Sea Eye 4, with the help of Rise Above, which is operated by German NGO Mission Lifeline, on Wednesday located 400 migrants traveling on a two-floor fishing boat that was taking on water.

The vessel rescued another 400 people in various operations, bringing the number on board to 800.

The Ocean Viking, operated by French humanitarian organization SOS Méditerranée, currently has another 314 migrants on board.

In its latest operation early Friday morning the Ocean Viking located 69 people traveling in a precarious wooden boat, which was in distress amid high waves.

So far this year, some 53,836 migrants have disembarked in Italy, almost double compared to the same period last year, according to the interior ministry. EFE 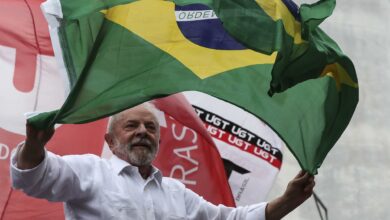 Brazil’s Lula blasts Bolsonaro for labeling his supporters as illiterates

OAS head under investigation for romance with staffer